I’ve always wanted to go to a drive in. Funny though that as long as I lived in McMinnville (at least 3 years) in the early 2000’s that I never managed to make the trip to Newberg to visit the drive in. On this particular Friday I’d made arrangements to pick up N in Portland and visit my favorite BBQ place Storr’s – which also happens to be in Newberg. The good thing is that the trip from Portland to Newberg on Friday was pretty quick and we were able to get our BBQ pretty quick. We did see folks lining up at the entrance to the drive in around 6pm as we drive by to get out BBQ and were concerned there was going to be a massive wait or traffic jam to get into the drive in. After getting our BBQ to go (Mmmmmmmmm) we headed back to the Drive In.

The Highway 99 Drive In is located to the east end of Newberg, it’s down a nondescript path that’s not terribly well marked, but once you’re on the right path its completely worth it. There’s an entrance where the rules are posted: “Tune Radio to 96.5 – Max Speed 5MPH – No Alcohol or BBQ – Hatchbacks may be no higher than top of vehicle – If you leave you must pay to re-enter – Don’t lay on the field – Lawn chairs are permitted if placed close to the front of the vehicle – No searches or Walk-ins – Cars over 6ft please park in back rows.” The prices for a family to watch the drive in movie is very reasonable and the night I went there were many families there at 6pm, several hours before the movie was scheduled to start around 9:20pm.

The field where the vehicles park has driving paths between the parts where the cars park. Where the cars park there are old-time posts where I can imagine the speakers that folks connected to their door/windows when the movie was playing to hear the movie. I was lucky to get a parking spot on the second row and pretty close to the middle. It was very heartwarming to see all of the kids and families enjoying their time at the drive in. The kids were running around and playing catch and jump rope. It reminded me of when I was growing up and there wasn’t any internet or video games – good clean fun outdoors. 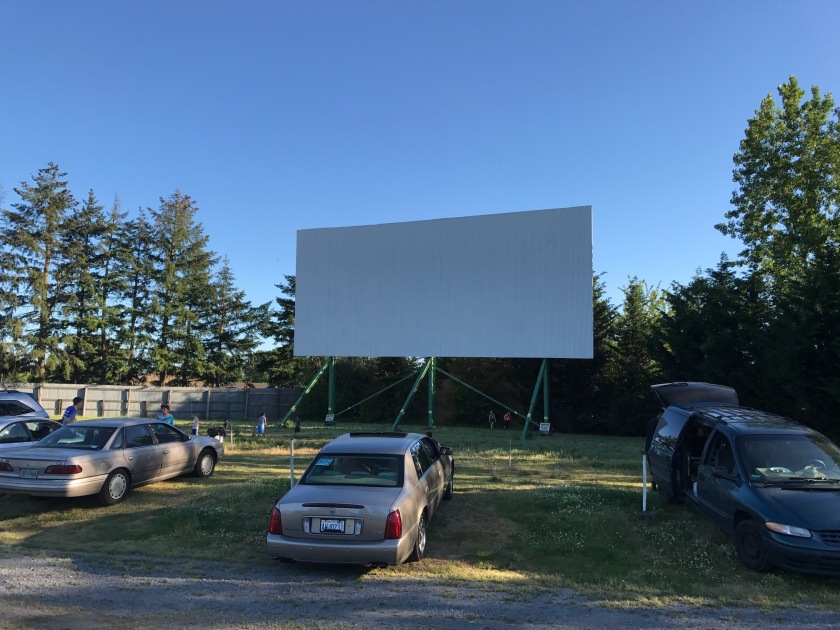 It was still early so there was plenty of spots still available. I can easily imagine the drive in back in the 50s or 60s with those classic cars and showing movies like The Day the Earth Stood Still, This Island Earth, or The Magnificent Seven. On this particular night I drove the 300, I was nervous the Bronco might not make the trip, so I suppose it’s kind of a sports-like car…? Maybe.

I made my way to the snack stand and while on the way took a closer look at the stands where the speakers originally were. The classic RCA logo can easily be seen and one can appreciate the history that is present here. According to the owner the drive in was originally built in 1948 and is on the national historic register. On the exterior of the snack stand there are many old posters and pictures showing the drive in during some of it’s past heydays.

Once inside the snack stand one can almost smell the nostalgia. It’s palpable. There’s a large machine near the entrance that must have been a fairly complicated candy dispensing machine that has gorgeous wood and mirrors on it – that was temporarily out of order while I was there. The snack stand prices and fare are exactly what I can imagine kids ordering an enjoying during the 70s and 80s. There’s popcorn, hotdogs, corndogs, nachos, and pretzels. All of the items are very reasonably priced and while you’re ordering there are many nostalgic advertisements and mementos from the past. 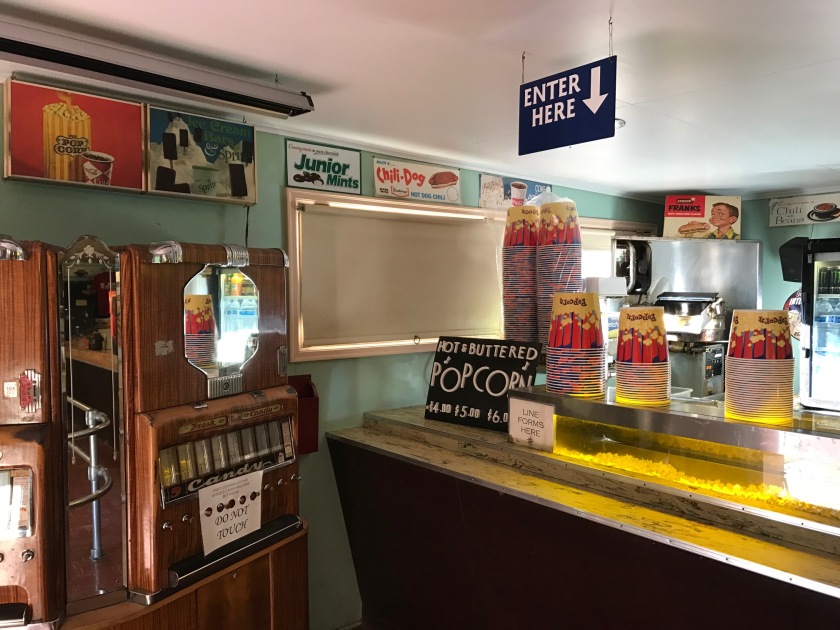 Also at the snack stand are a number of historic movie posters from movies like “ Cleopatra Jones and the Casino of Gold”, “Attack of the Crab Monsters”, “Attack of the 50th Woman”, and “The Hard Ride”. There’s also a large poster I found for “Corvette Summer” which stars Mark Hamill and Annie Potts, stars of Star Wars and Ghost Busters respectively. One other thing I noticed at the snack stand was the candy cigarettes which I hadn’t seen in years – not that I deliberately look for them, but they were prominently displayed at the dive in. I thought it was cool, because I remember seeing them when I was a kid in the south. Didn’t have them too often, but I remember folks saying the candy would make kids think cigarettes were cool.

The wait was nice though there wasn’t too much to do until the movie. It was nice to enjoy the evening and wait of the movie to start. Be sure to tune your radio into the drive in station – 96.5 early as there is music playing and there are also informal voting that takes place for the next movies being offered during the next week or two. I enjoyed participating in that quite a bit. Once dusk arrived there were several vintage advertising clips I sincerely enjoyed. Some crazy hot dog clips and some others advertising other products. There were also some newer clips done with an old-time feel and look, which I thought added to the authenticity. 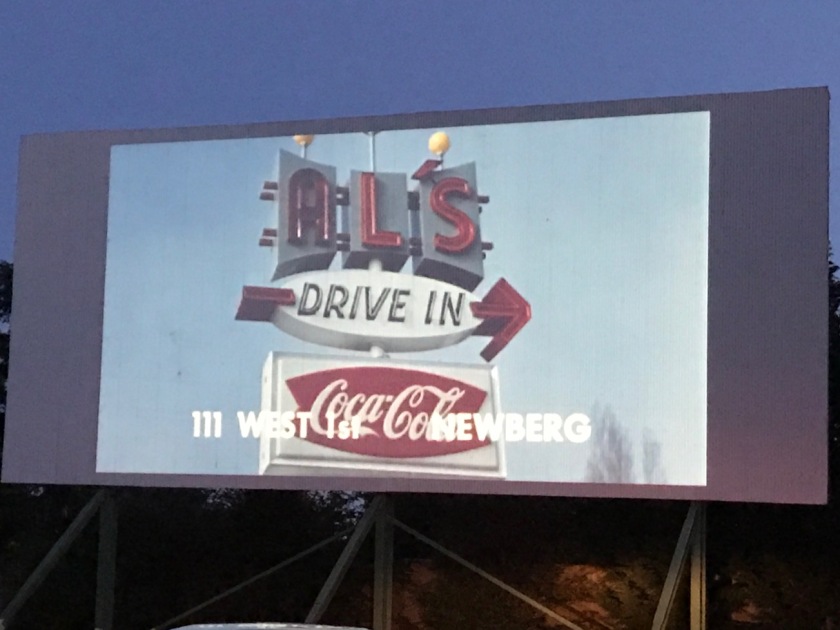 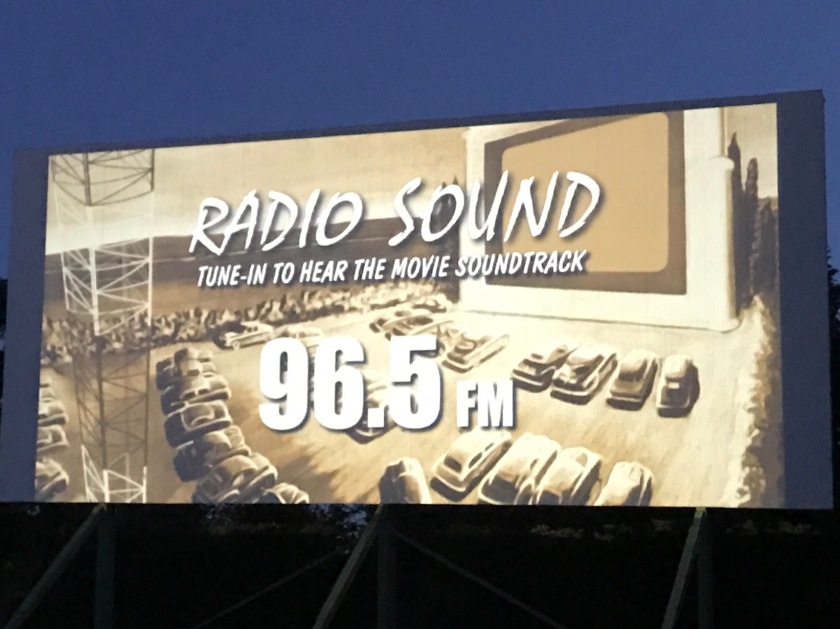 One of the best things I liked about the 99W drive in was the fact that I have a decent radio in my car and that lent itself to the overall enjoyment of the movie quite a bit. The bass of the movie came through very well in the car and I could feel my seat rumbling every so often, which was pretty cool. Overall I give the 99W drive in five HeyWillamettes for their amazing vintage drive in, which still has all of the stands for the original wired speakers, the great snack stand, and the great advertisements shown before and during intermission of the movies.