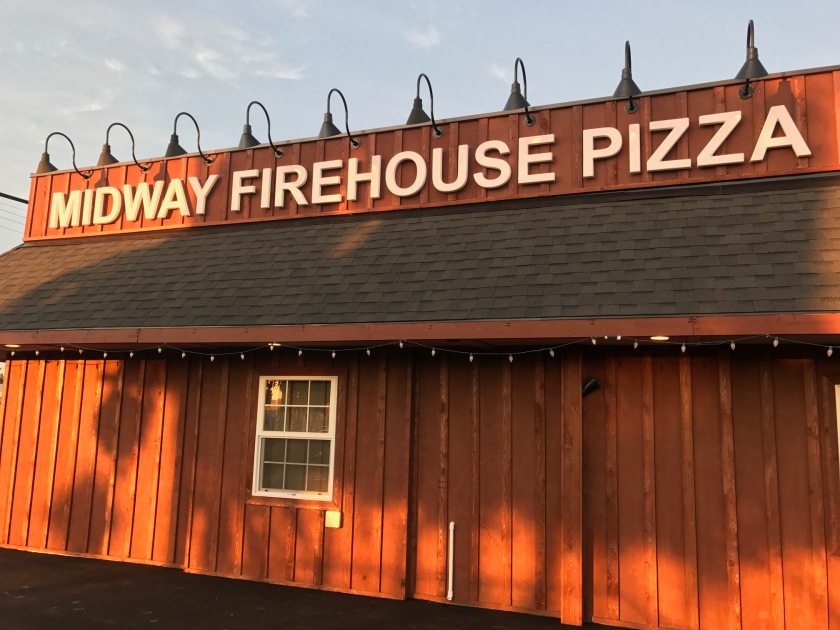 Things were pretty quiet on this warm Sunday night.  A co-worker of mine (thanks K!) mentioned that a couple of relatives of hers worked at the Midway Firehouse Pizza and that being another place I’d driven by a zillion times I thought I should give it a try – plus pizza – Hello!!??  The parking lot and the rest of the building looked brand new, though I was certain sometime when I’d driven by it before it looked like it might need some help – good for the current owners for restoring and renovating it.

Here’s the thing – I’m not a pizza snob – far from it, but I did own part of a business that might as well have been inside a pizza place.  I had pizza all the time, and it wasn’t too bad pizza either.  It was a chain but not a national chain, or maybe it is, but it’s still decent pizza.  I won’t name it because I still like it but suffice to say none of the national chains really do much for me.   I was very pleased when I drove the 300 – don’t get on my case, ok, the weather was nice and I rolled down the windows and the Bronco still has this weird thing where sometimes it decides to show some personality and I need to roll it forward when it doesn’t start and it doesn’t realize it’s in park, but that’s not exactly what you wanted to read here is it?  The pizza, I get it.

The exterior of Midway Firehouse Pizza is all new having been recently restored and renovated and it looks like it.  It’s virtually a new building and stands proudly when driving south along Highway two nineteen.  There is a slow corner when heading along the highway so the new building and signs are very visible from the road.

Initially when entering the interior is pleasantly clean and very tastefully furnished in a (of course) firehouse motif – I wasn’t surprised by this, but was please that it was so well done.  The interior had very nice light colored walls and light toned wood and the effect was very pleasing.  Obviously the person who had renovated the interior knew something about color and wood type selection, because the effect was very nice a tasteful.  Moving past the first room is a set of turnouts and a chalkboard listing all of the specials.  The main dining room is just past this while a game room is on the left.  The game room has a foosball table and a shuffleboard table – I remember playing both of those when I was in college – some unknown number of years ago – no I’m not telling, so don’t ask. 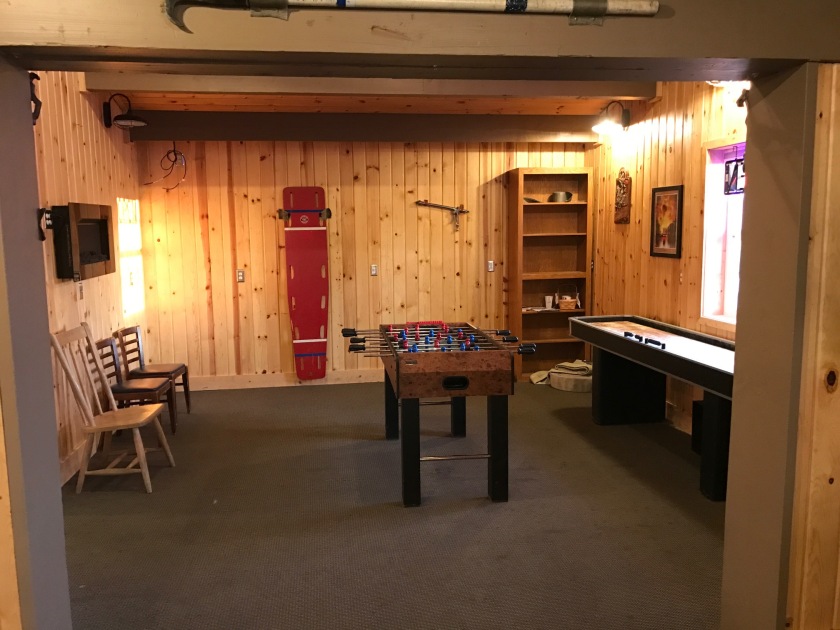 I walked past the game room and went up to the ordering counter.  The menu looks fantastic and I honestly had a hard time deciding – I’m aware that some folks think ordering should be quick but hey, pizza choice is a tough decision, these things take time and careful consideration, so don’t rush me!  At the end I couldn’t decide on a pizza, and ended up ordering a calzone.  Ive had them before at some places and they are normally not too bad.  I also ordered my normal ice tea (which turned out to be super good) and made my way to the dining room and a comfy spot.

As I looked around the dining room I continued to be impressed by the renovation – everything was new and amazingly well designed and worked well together. The floors in the main dining room were dark colored polished concrete and there are several well positioned televisions available for folks to watch whatever game is being shown plus lots of tables.  It looks like there is seating for about thirty or maybe thirty five customers, with several spots available at a counter.

While I was sitting there I was visited by my coworkers relative (Hi A!!!) who is just a super nice person and asked if there was a flavor of pizza we would like to try – it was very kind of her to pay for a surprise small pizza – which honestly was just about the world’s best pizza in the world have ever had ever in the world.  So, you know, I liked it.  The pizza was a  small nine inch Brush Fire BBQ, and I can whole heartedly recommend to anyone who wants a delicious and tasty pizza experience.  Wow.  Amazing!!!!!  So good in fact that I was not as diligent as I usually am in taking my food picture – a you can see, I’m so disappointed in myself, but I am going to eat more of that pizza!!!  My calzone was also super good – I could only eat half after half of that pizza, but I can also tell you that the calzone warmed up the next day is super good as well – I had that for dinner on Monday. 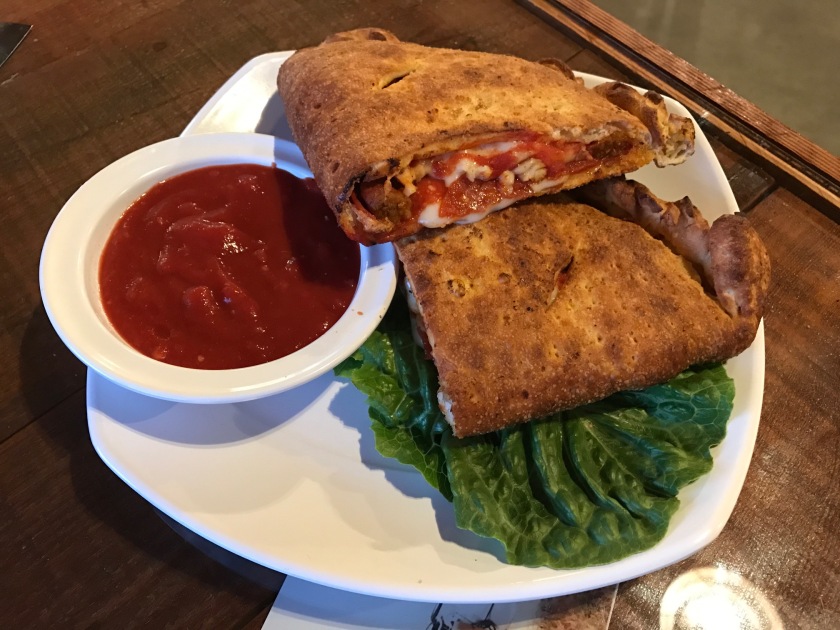 I can say without doubt that I’ll give Midway Firehouse Pizza 5 HeyWillamettes for their awesome renovation, amazing food (both pizza and calzones), and the fantastic firehouse themes.  I’ve also got to give one extra HeyWillamette (if I don’t I’ll definitely hear about it) for the amazing service and super cool A who works there and took great care of us when we visited.  I’ll be going back on a Friday, Sunday or Monday night and trying out more of their fantastic selections. You should too – I’m sure you’ll love the food, selection, and hospitality as much as I did.  Thanks again!!!