First of all let me apologize for being absent for so long – I really needed to focus on a particularly difficult professional certification I was working on.  It was pretty tough but I managed to pass the first time, I’m happy to say woohoo!!!  Still, it meant I neglected you all a little bit and I’m super sorry for that.

Anyhow, on to the story!!  I visited the cornbread cafe while I was in Eugene a couple of weeks ago.  I was initially somewhat reluctant – anyone who knows me would certainly be surprised I was at a vegetarian place – not to mention a vegan one, but it sounded really interesting, so I figured I’d give it a try, an experiment of sorts.

The Cornbread Cafe is located in Eugene on 7th avenue and has a large sign out front – it was formerly Deb’s Drive In, but has been masterfully converted.  The Cornbread Cafe smacks of Eugene origins and has the colorful design and looks of a spot whose design and color scheme were very carefully thought out.  I loved the look of it as soon as I arrived.

The front of the Cornbread Cafe has large windows that allow lots of light inside making it feel airy and light.  There is something familiar about it at the same time, due to it being a building that was likely built in the fifties or sixties (not too sure actually) it still has a feel of a diner type restaurant.  As soon as I stepped I notice the classic flooring – awesome! and the colors inside – very cool, relaxing and nice.  Straight ahead is a large refrigerator where vegan deserts of all sorts can be purchased.

To the right just inside is a vintage Ms.Packman tabletop game!  Dangit!! – if I only had a quarter!!!  Also to the right – which shows the creativity of the designers, are the bricks that make up the lower part of the structure – just below the windows.  It looks like there may have been some kind of wooden ledge that was removed exposing the brick works.  On top of the brick some mortar was added then artfully colored ceramic was pressed into the mortar.  It makes for a lovely display.

I turned to the left where the seating area was – fortunately there were places to sit – I can see the Cornbread Cafe filling up on the weekends!!  There are lots of stool seats along the front counter – eight people can dine there and there are also also quite a few booths as well along the windows. 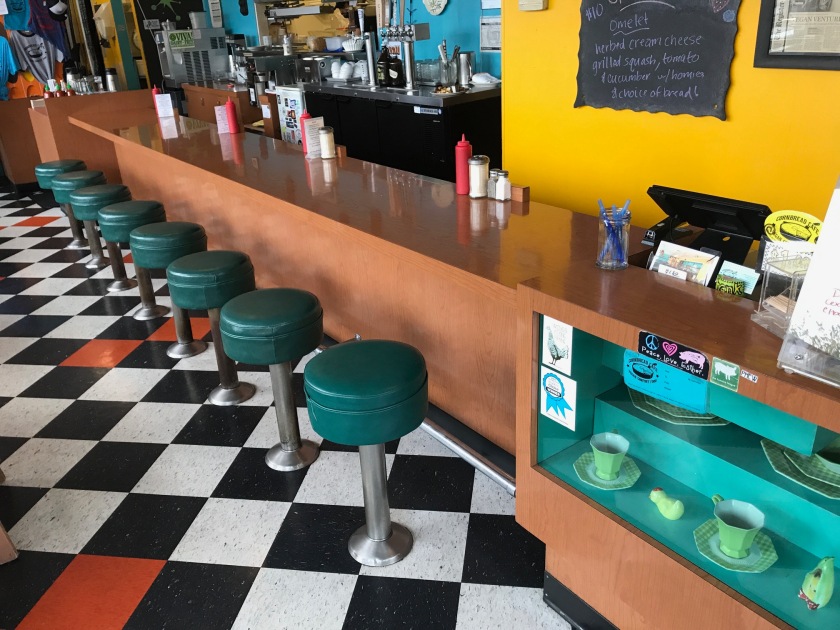 Above the counter is a chalkboard that shows the latest specials – today it was a vegan omelet for ten dollars that had herbed cream cheese, grilled squash, tomatoes and cucumber with homies, plus a choice of breads.

We were shown to our seats (B, Nic and my dad), and I also noticed the small cute booths that were across the way next to us.  Seats two comfortably.  You can also see the cool colors and the kitchen through the holes in the wall.  Just behind our booth is a fantastic display of local artwork – adds quite a bit to the esthetic of the Cornbread Cafe. 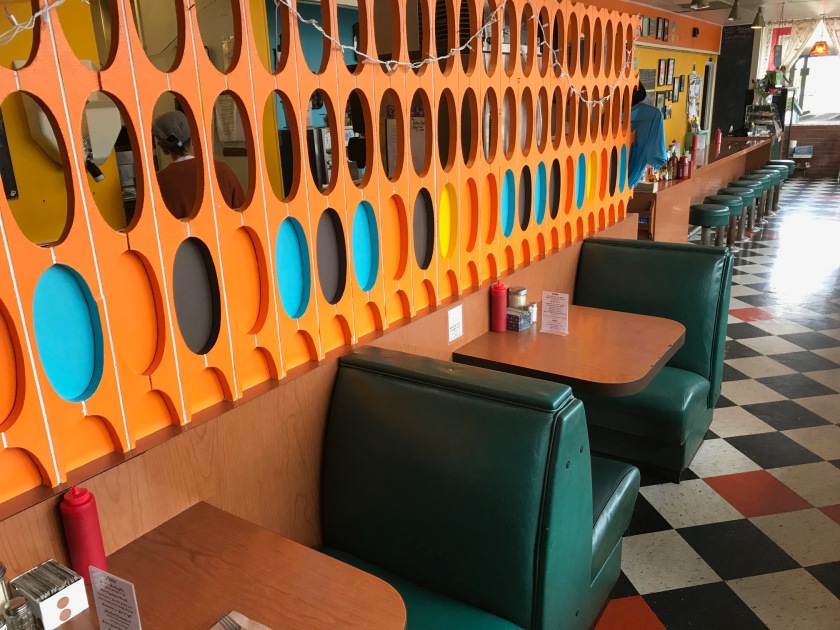 Once we sat down I got a good opportunity to check out the menu – now, not being a vegan or even vegetarian I had some problems understanding the more obscure (to me) ingredients of many of the items.  I did get the idea of a Chicken Waffle – but a vegan one, how the..?!??  Being from the south I was nearly offended by the idea of this, but decided it might be alright when Nic was able to explain several of the items for me.  I still thought it was odd, but decided to give one that sounded particularly interesting a try – the Country Breakfast – it sounded a little bit like Chicken Fried Steak, so yeah, might as well give it a try, right? 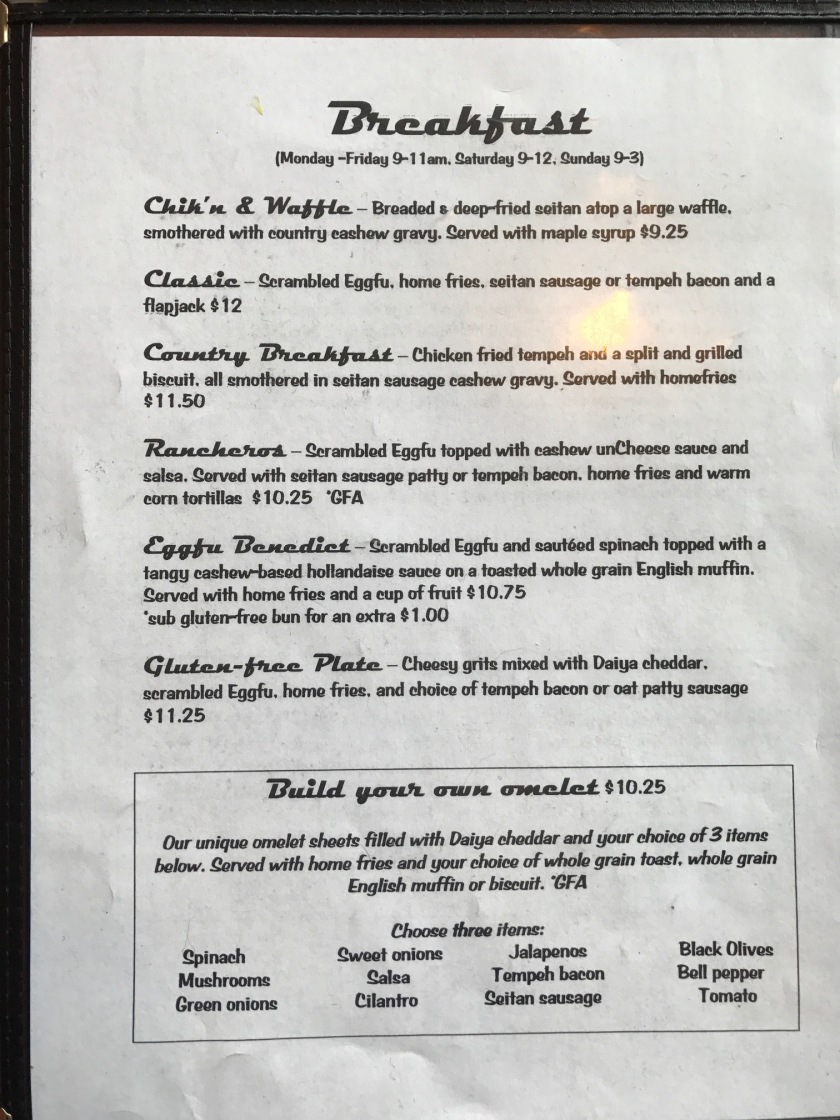 Nic decided to try the Chicken and Waffles – brave girl that one, while B and my dad opted with the special.  We had a few minutes so enjoyed the trivial pursuit cards that were on each table.  It was the original trivial pursuit that came out in the eighties, so even though I consider myself pretty knowledgable I couldn’t begin to answer them very well at all.  I think the others had some better luck, but since I’m writing the story we’ll just consider me the winner!  Our food arrived soon after that and I was very pleasantly surprised to see how it looked – not at all bad – looked fantastic in fact. 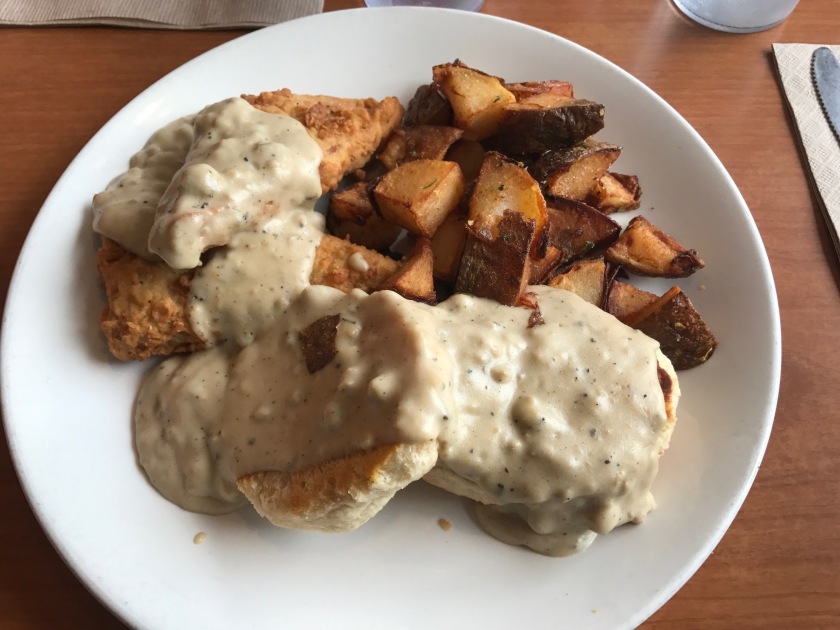 My dish was amazing looking, it had all of the things I love about chicken fried steak, but I was able to eat it with a clear conscience – vegan organic food is supposed to be much better for you, right?  The gravy was fantastic tasting and thick, though I have no idea what it contained.  The home fries were ah-mazing!  And the chicken fried things were good enough for me to not bother to ask what they actually contained.   Nic’s looked awesome as well – similarly cooked crunchy chicken type stuff on top with delicious gravy and a gorgeous waffle below.  Yummy!!!  My dad and B’s breakfast was also amazing looking and they both reported that it was every bit as good as it tasted.  It was a very educational experience for me – I’d definitely try some more vegan food in the future!

All-in-all I can definitely recommend anyone who has an opportunity to visit Eugene and has some time to get breakfast or lunch to give the Cornbread Cafe a try, you will be very pleasantly surprised – as I was.  The food and atmosphere are both absolutely fantastic!!!  It definitely deserved five whole Heywillamettes for their amazing food and fantastic decor.