Bridge Over Troubled Waters Tuesday – Week six!  Dorena Bridge was the third bridge on our trip through Cottage Grove.  I like this one because as I’m starting to see more bridges I’m starting to recognize features that I appreciate like more and more – this one for instance has both windows and is a drive-through type bridge.  An additional feature it has is that it is a very wide drive-through bridge.  It has the normal lighting below the roof, but the large windows add something wonderful!

We arrived at the bridge, Nic and I, and the first thing we saw, unfortunately was a very poorly maintained bathroom. There was garbage laying around and neither one of us were brave enough to actually open the door of the restroom.  The bridge looks like it accommodated vehicle traffic fairly recently, and can be driven through but like many covered bridges it is being preserved by not being used any longer for vehicular traffic – once driven through there is only a dead end and you’ll need to drive through again to get out. 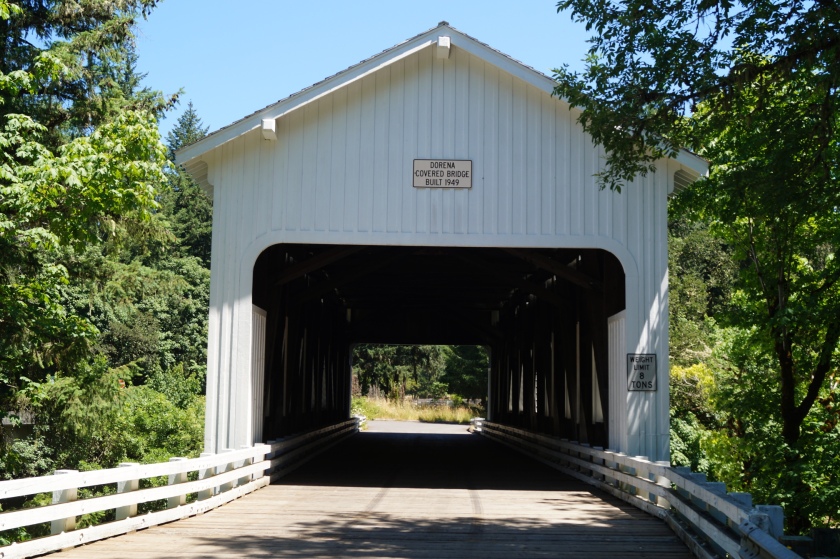 I noticed that the bridge was built in nineteen forty-nine which makes it one of the newer historic covered bridges that we have seen. Most of them seem to have been built in the twenties  and thirties.  Despite it being over sixty years old this bridge was extremely well preserved and had a wide entrance that looked big enough to accommodate two cars driving side-by-side.  The top of the entrance was delicately curved and I found myself appreciating that on this bridge.  I moved further inside and was immediately impressed because this one, unlike many of the others I’ve seen had gaps between the slats, allowing the light to enter from below. 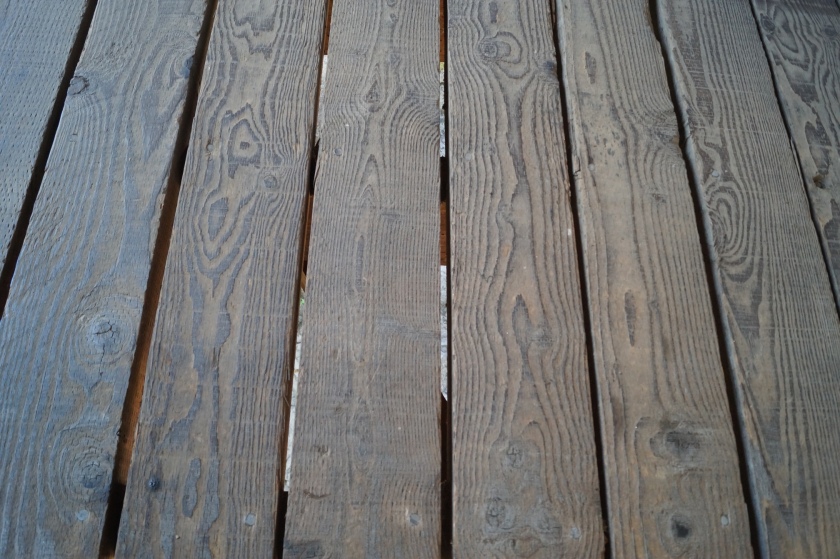 Another thing I noticed was that the windows had slots in them and even though some light got in they weren’t fully open windows. This was surely to protect the inside of the bridge from excess moisture.  There are several windows per side and there was also the now familiar gap at the top of each wall before the roof which allowed additional light to enter and illuminate the interior.  Below the windows was a guard rail to protect both vehicles and the delicate structure of the bridge itself.

One of the things I enjoyed particularly was the river below and the water rushing by that was being illuminated by the sun overhead and the reflections on the water that were coming through the slats in the floor.  That reflected light seeing through the slats made for a beautiful sight and even more impressive because of the dancing lights on the interior roof of the bridge. It showed both the majesty of the river and the complex construction of the bridge.

While I was making my way through the bridge and did admiring the the construction and beauty of the bridge I took a moment to look out through one of the windows onto the river and was able to get a nice picture through the slats although the picture didn’t turn out as nice as I would’ve preferred.  It was a sunny day and the temperature was high but despite that the coolness of the bridge inside in the shadows made for a welcome relief from the heat of the day.

One of the things I worry about is that people will stop appreciating the beauty of these historic bridges, however while I was taking pictures of the covered Bridge more than one person came up to marvel over its construction much as I had. There was even a bicyclist who wrote through the bridge and took several pictures from the far end.

As I made my way back from the end to where I had parked the car,  I paused after exiting the bridge and looked back at the river.   It made for a beautiful view and I found myself wondering how cold the water was because the heat of the day made for somewhat uncomfortable conditions.  Dorena is a great example of many of the bridges that are found in Oregon and is a classic style that I very much admire.  This bridge has several features that I haven’t seen in other bridges,  Some examples include the gaps in the roadway which allow the sun to shine through from the river below and large windows and an extra wide deck that would presumably have allowed cars to past side-by-side. Overall the Dorena covered bridge deserves four and a half Heywillamettes.   I very much enjoyed visiting this bridge and I’m sure you will as well.  The only detractor in my opinion was the rather poorly maintained and trash strewn bathroom near the starting point for the bridge.