I visited the southern Willamette Valley – Eugene to be precise, try to get a look at some new bridges – it turns out there are quite a few in the southern Willamette Valley.  My folks live there, so it’s a good way to combine activities, I can visit them and visit interesting places.  It was Saturday afternoon and I was thinking about some place I’d either been to a few times, or a new place.  Tough to find as I’d lived there for ten years, but I’ve lived in the norther Willamette Valley for almost twenty years, so there are a few different places to dine.  I think I’ve been to Turtles before, but I’m not really sure.  I’m certain my folks have talked about it, but can’t quite remember if I’ve been here before.  Just so you know – the google map is a little wonky with the name Turtles and the Loft, so I couldn’t embed the name, but trust me, the address is correct, and you’ll find Turtles there!

Turtles is a one story building that has pretty good signage and a nice parking lot.  The sign is close to the street and is very easily seen.  I really like the way some foliage was trained to grow to just below the Turtles sign.  It makes for a great sight!  There is some very nice seating outside and since the seating faces east it should be mostly in the shade while Turtles is open.  I thought that was a really nice touch there.  The seating and tables outside are wrought iron and pretty comfortable.  There area at least six or eight tables with chairs so most of the time folks have a good alternative if they want to dine outside.

Once inside Turtles there is a fantastic waiting area with comfortable seats and a large cabinet above the bench that has some great curios in it.  I won’t spoil too much of the surprise, but there is a cool looking turtle skull – I’m not sure if it’s real or not, but it looked pretty realistic.  The seats are nicely curves to aid in conversation while waiting – though when we visited there wasn’t anyone waiting.  The bench below the display cabinet was comfortable and beautifully made as well. 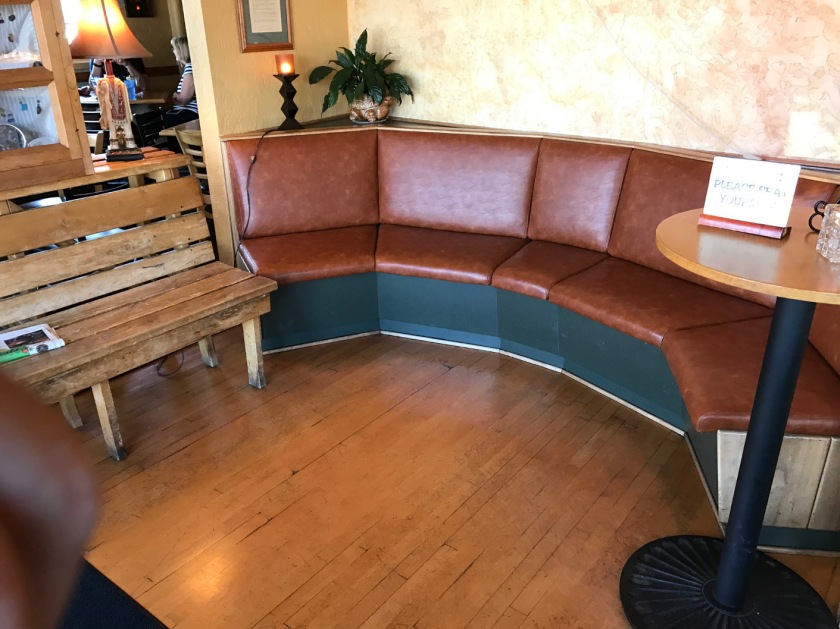 The tables we were escorted to were comfortable and roomy.  It had a nice view outside and comfortable seats.  Another thing I liked about out seating area (though I didn’t get a particularly good picture) was an enormous indoor large leaf tree or some kind of large foliage growing – I thought it added quite a bit to the appeal of Turtles and also some sophistication.  It wasn’t overgrown or tacky looking, but looked nice and lush.

Once we got seated – I was there with my folks and Nic, I got a chance to look around the room we were in.  It’s a pretty nice room – I liked the fact that it wasn’t so crowded and that the tables weren’t super well organized.  It made the entire place feel much more comfortable and home-like.  There was an elevated section that altered the level of the floor – which I thought was a pretty nice touch.  There are a couple of televisions around – though not too many to be distracting for conversations or visiting with friends or relatives.  There are also quote a few artistic turtles around – not surprising considering the name – which added quite a bit of sophistication to the esthetic inside.  Rather than a stucco (which is what the walls seemed to be made of – or at least resembled) there are nice circles and turtle imagery.

Finally I got a few minutes to stop gawking and take a look at the menu – everything sounded so good.  The menus were filled with lots of great sounding appetizers and plenty of great eats.

Nic and my folks ordered some appetizers (and I’ll admit I enjoyed them a little too!) they got some of the broccoli cheese bites (which ended up being pretty hot – not spicy, but temperature, so be careful when you eat them, we found that putting them on a plate and cutting them with a knife and eating each half worked best) and some of the mozzarella sticks – which are some of my favorites.  I’ll admit a certain weakness for the mozzarella sticks and I very likely had more than I should have had.  For late lunch I ended up ordering a simple turkey hamburger with cheese and some fries (put the pickles on the side please).  The burger was excellent!  I do really enjoy ground turkey burgers, when cooked right they ware just fantastic, and trust me, Turtles does theirs right.  Nic ordered a fancy salmon salad that she reported was just wonderful, though she admitted she couldn’t finish it all in one sitting.  It certainly smelled wonderful though I didn’t have any.  My dad ordered the chicken quesadilla which looked and smelled wonderful.  Pretty sure he saved a bite or two for the dogs as well! 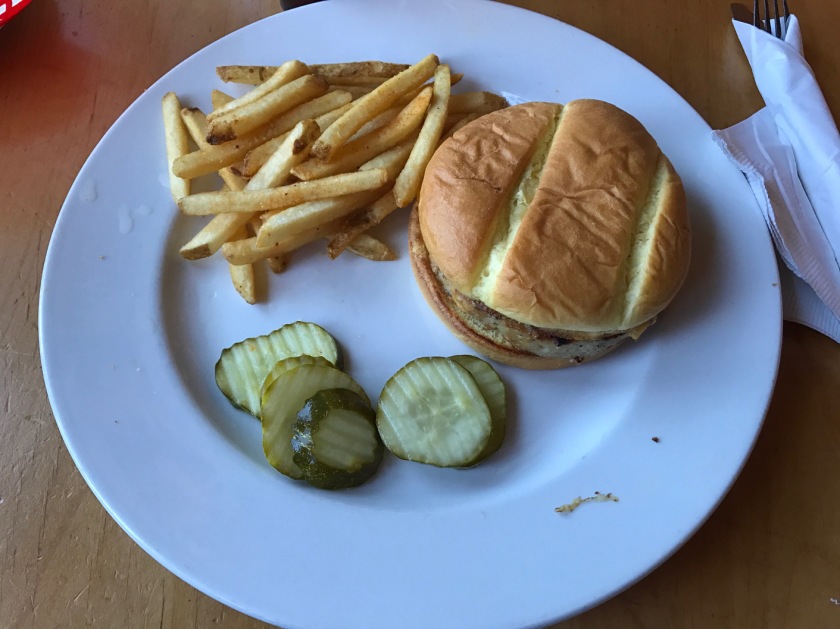 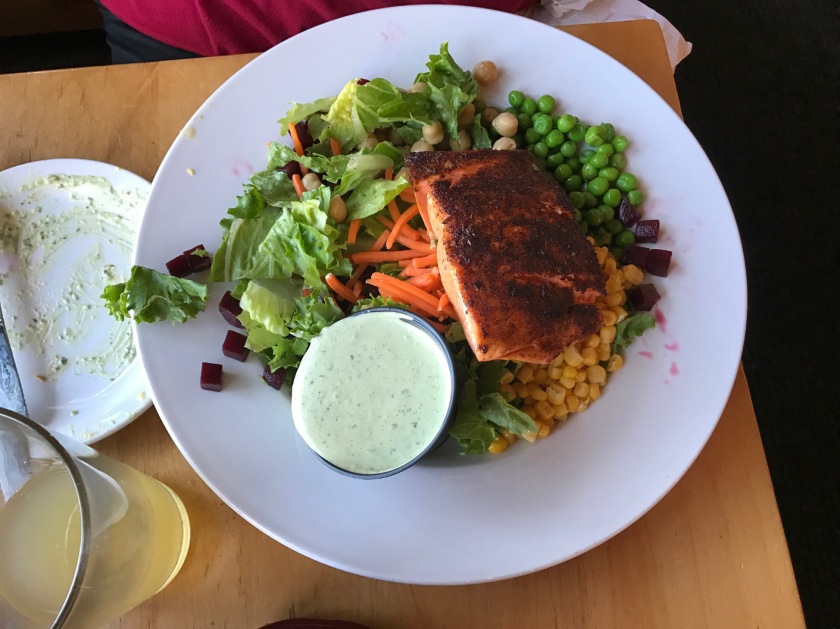 The food and atmosphere were both wonderful at Turtles, and once we were finished with our meal  wandered around a little more, there was a nice large wine rack that was a great display.  I didn’t spend much time perusing the wine menu – it isn’t much of a thing for me, but it added to the sophistication of the place for me.  Also just past the wine rack was another large room for more diners – that was unoccupied when we visited, which admittedly was just in the middle between lunch and dinner.

Overall I really enjoyed visiting Turtles – it’s got a great esthetic and the food was really good!  The tables are arranged in a pleasing manner and the walls are painted with some great turtle designs.  It definitely deserves five Heywillamettes and I can wholeheartedly recommend anyone who visits Eugene and has an opportunity to visit to stop by Turtles for a meal, I’m sure you’ll be pleased!