I found Pappy’s when I was looking for a place to eat on the way to the Table Rock Wilderness.  I didn’t really stumble upon it that wouldn’t really be the truth.  In all honesty I’d found it when I was looking for places that seemed interesting in small towns.  Canby seemed like a good spot and it did end up being on the way to the Table Rock wilderness – which is where I’d decided to spend the first half of the day on Saturday.  My first plan had been to do a few different things, but when I heard the weather forecast and the extremely high temperatures forecast for today I thought, well, I’d like to get as far out of town and up into some elevation if I can.  Also, my allergies are quite tough to deal with this time of year so I wanted to get things done with as early as possible and get back to some air conditioning if I could.

Pappy’s is located in an odd building – it’s like a one-story indoor mall from the seventies or sixties.    There’s not much advertising on the outside so make sure your GPS is set correctly and you’ll be sure to find it.  I did notice a sandwich board near the street, so you might be able to spot it, but I had a hard time seeing anything until I was in the parking lot.  The parking lot is pretty nice and was fairly empty –  at least this early in the morning.  The parking lot is bricks offset from each other and was very nice to park on – it lent a high quality to the parking lot and a sophisticated air. 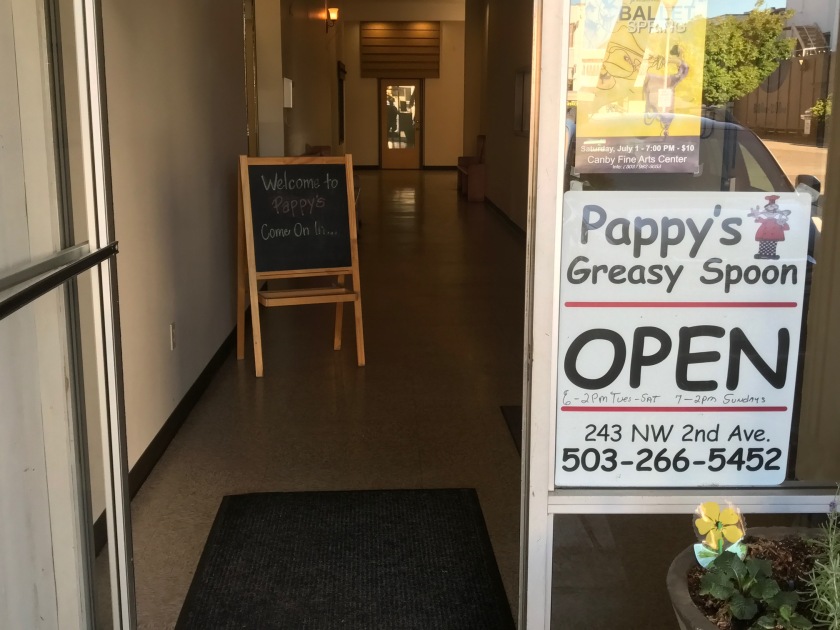 Once I got out of the Bronco (Yes, as I was planning on adventuring on an unpaved road I’d taken the bronco and it was glorious!!!) I did notice some additional signage, though it was still a bit tough to spot.  The entry had a nice sign showing the times Pappy’s was open – looked like pretty early which is always a bonus as far as I’m concerned.

Once inside I noticed how authentically decorated Pappy’s is.  Above the pay counter is another large banner sign announcing that you’ve arrived at Pappy’s Greasy Spoon – nobody inside will forgetting where they’re dining.  The decor is done in Coca Cola colors – red and white – and decorated with quite a bit of memorabilia saluting Coca Cola too. 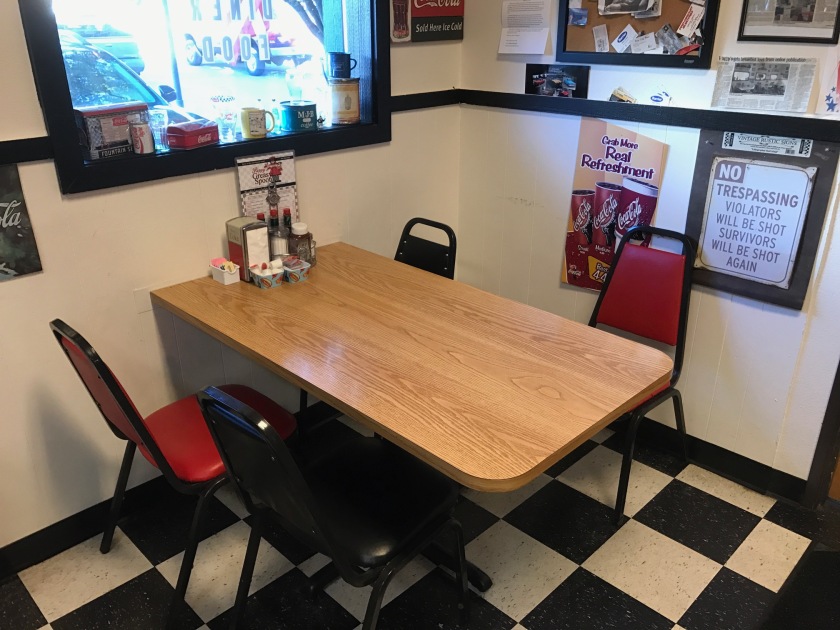 I chose a table near the corner – the better to look out the window at the gorgeous morning.  It was a beautiful early summer morning and I really enjoyed the drive here and wanted to make sure not to miss the colors of the morning. 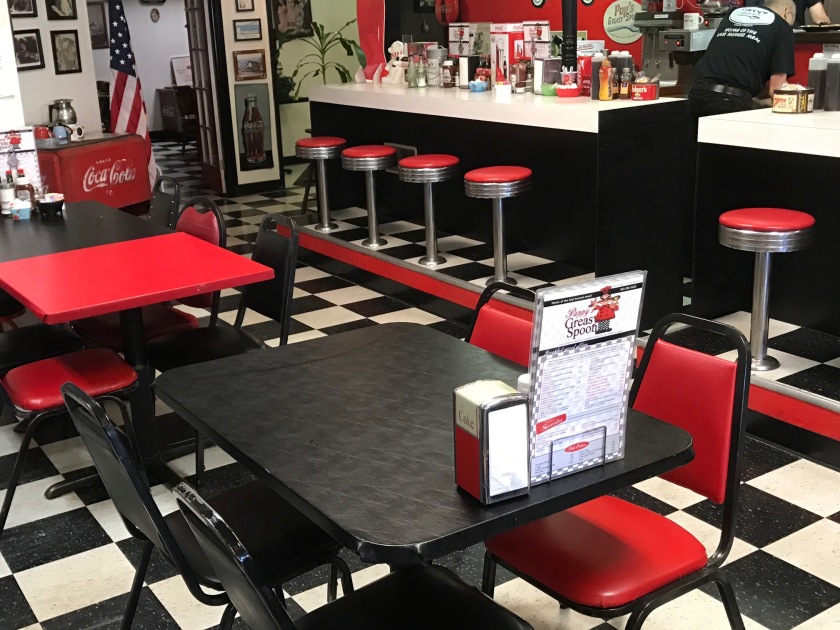 There were quite a few tables and counter spots where customers could sit.  Just love the old counter seats – I remember getting lunch at a Woolworths when I lived in Houma, Louisiana at the counter so I’ve got some special feelings for those kinds of things. 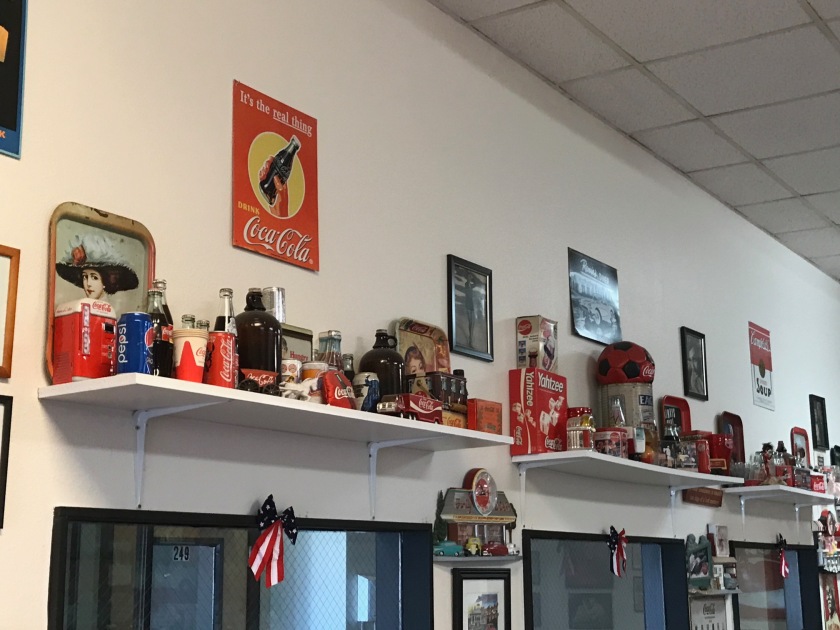 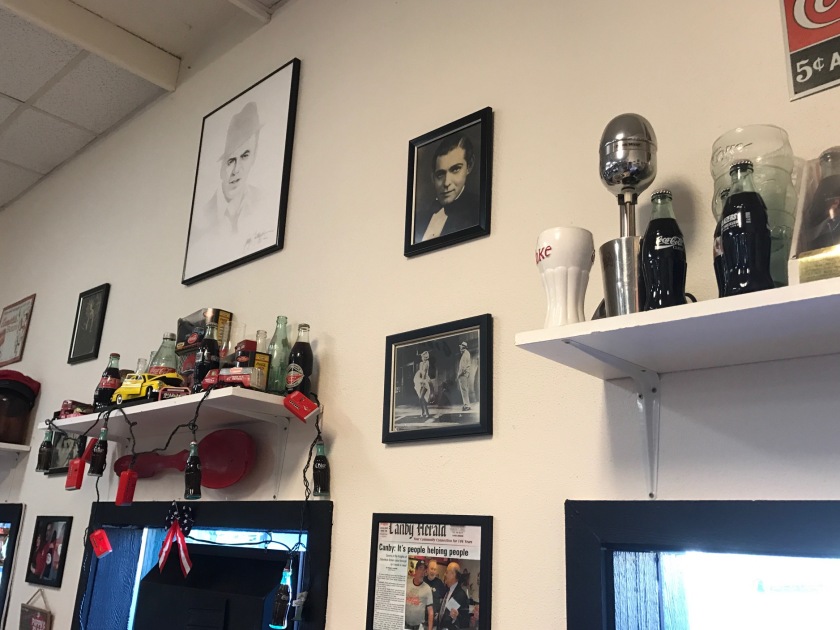 I noticed as I finally sat down that there were shelves above the tables absolutely crammed with every type of knick-knack I’ve ever seen and quite a few I’d never seen before. 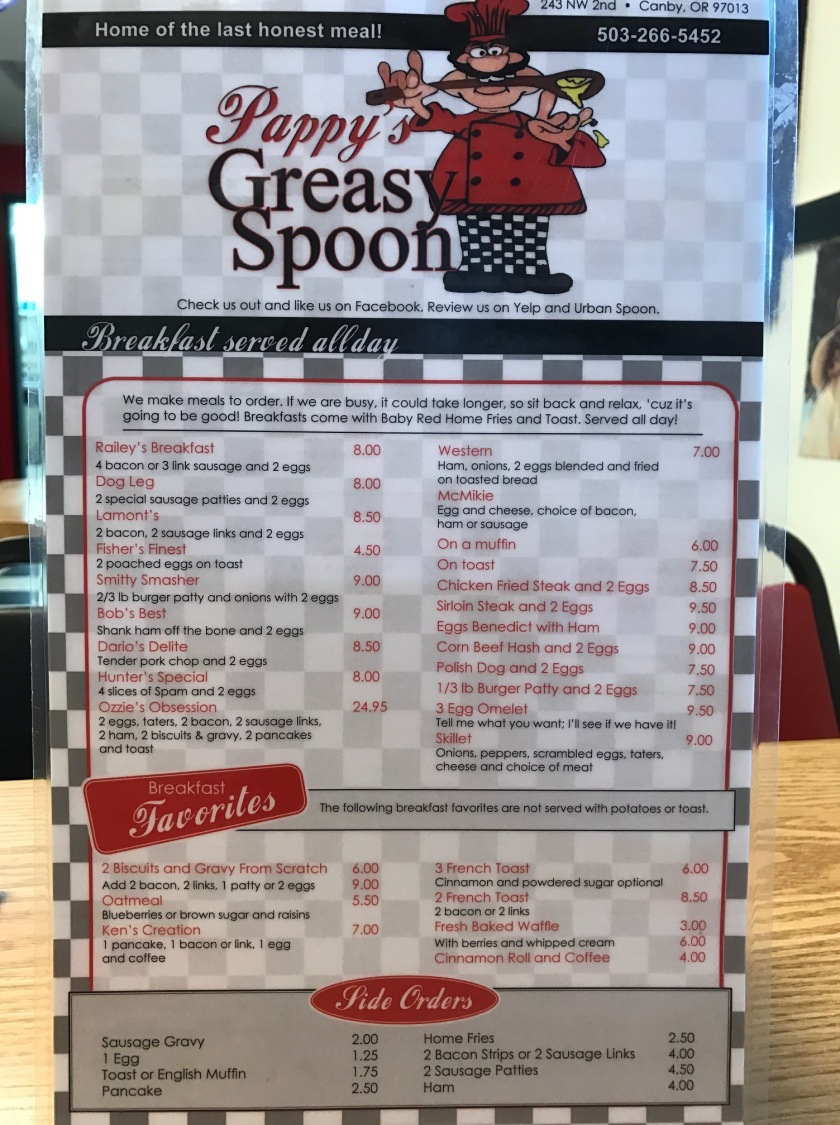 I took a look at the menu and hoped that the waked have my favorite breakfast – you know, chicken fried steak.  I was hopeful, but sometimes you know, places don’t have it, even if it is an American classic.  As I browsed the menu I was in luck, they had my favorite, here was a special thing, they had red potatoes.  I was anxious to try them – I ordered my favorite and asked for the potatoes crispy and eggs scrambled with cheese.  Also rye toast.  One of the nicer things as well at Pappy’s was that the prices were very nice, the chicken fried steak was only eight dollars and fifty cents – seems like a pretty good deal! 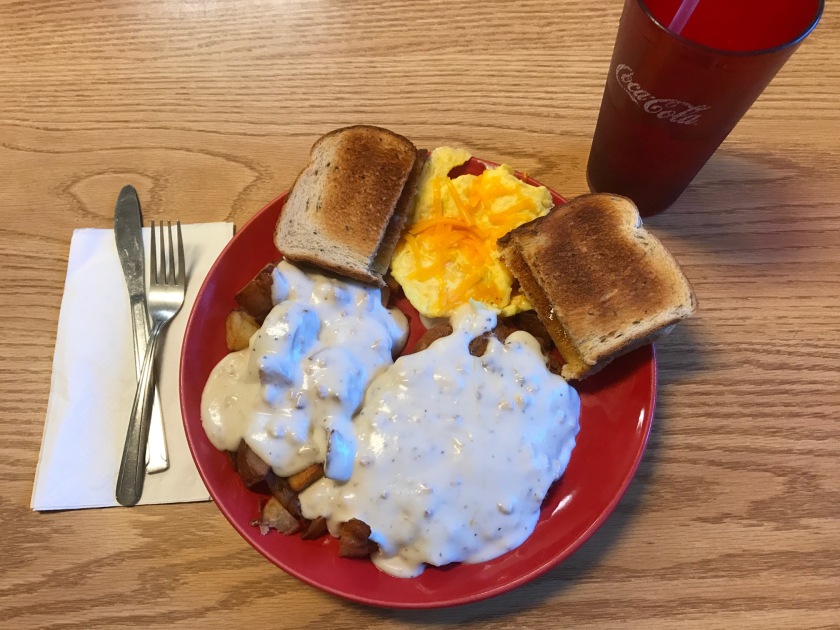 Pappy’s Greasy Spoon was a delightful surprise, and deserves five big Heywillamettes.  I was very impressed with the decor, the service and the menu.  The food was fantastic and nearly everything was a surprise after the lack of good signage on the outside – just remember to set your GPS and you’ll find it with no problems.