I’ve probably driven by Zippy’s over a thousand times, I mean that literally.  I worked in Forest Grove then Hillsboro and lived in McMinnville and Zippy’s was along my daily route.  Both ways.  Once in the morning and once on the way home.  Five days a week.  Fifty weeks a year – more or less.   Four or five years worth – and I never stopped.  Not sure why.  I still ask myself and I don’t have a good answer as to why I never did all of these wonderful things I’m enjoying so much these days before.  I certainly had opportunities – in Zippy’s case thousands of opportunities, well one could argue that I had maybe half that number because they wouldn’t be open as early as I zoomed by, sure, but I could have stopped on my way home.  Maybe that’s why I’m investing myself so heavily in this whole venture – and enjoying it so much, it gives me opportunities to actually do those things I’ve always said I should do but never have.  Something to ponder anyway.  Zippy’s is in Yamhill.  It’s a modest town south of Forest Grove and has pretty good signage if you’re driving along Highway Ninety-Nine.  Be sure to slow down in Yamhill – there is a school zone and the police take their speed laws very seriously – I do speak from experience.

I decided on a whim to stop by and parked the 300 (I know, I know – why not the Bronco, well, I was on a long drive and wanted to make sure there wasn’t any issues with me 1) hitching a ride when/if it broke down 2) Spending $100 in gas or 3) realizing I vastly prefer it to the 300 – which I already know). It’s easy enough to find, it’s about a block south of the high school and the one blinking yellow light in town.  It’s pretty close to the Trask Mountain Outpost.  I parked across the street and admired the outside for a moment.  I like the sign and the the idea that the pizzas are fresh made.  The only day they are closed is Monday. 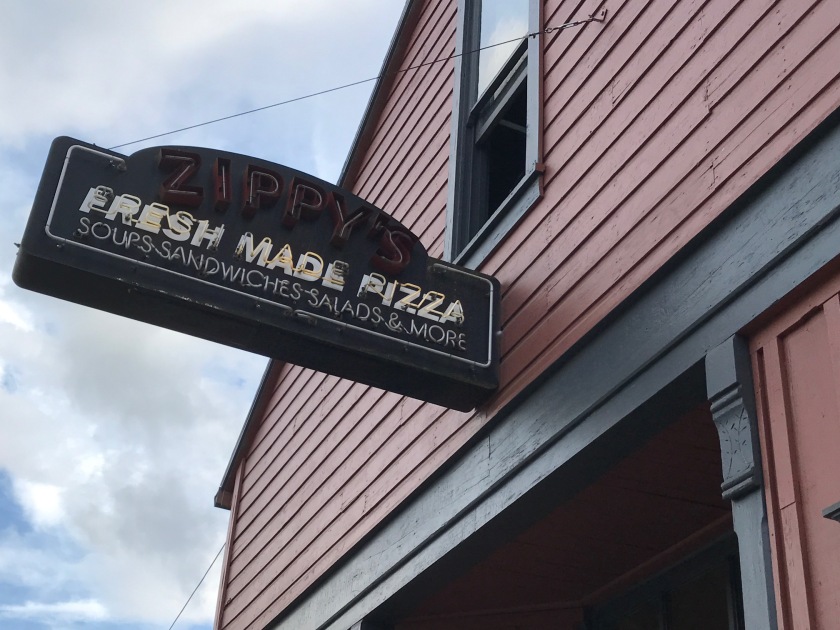 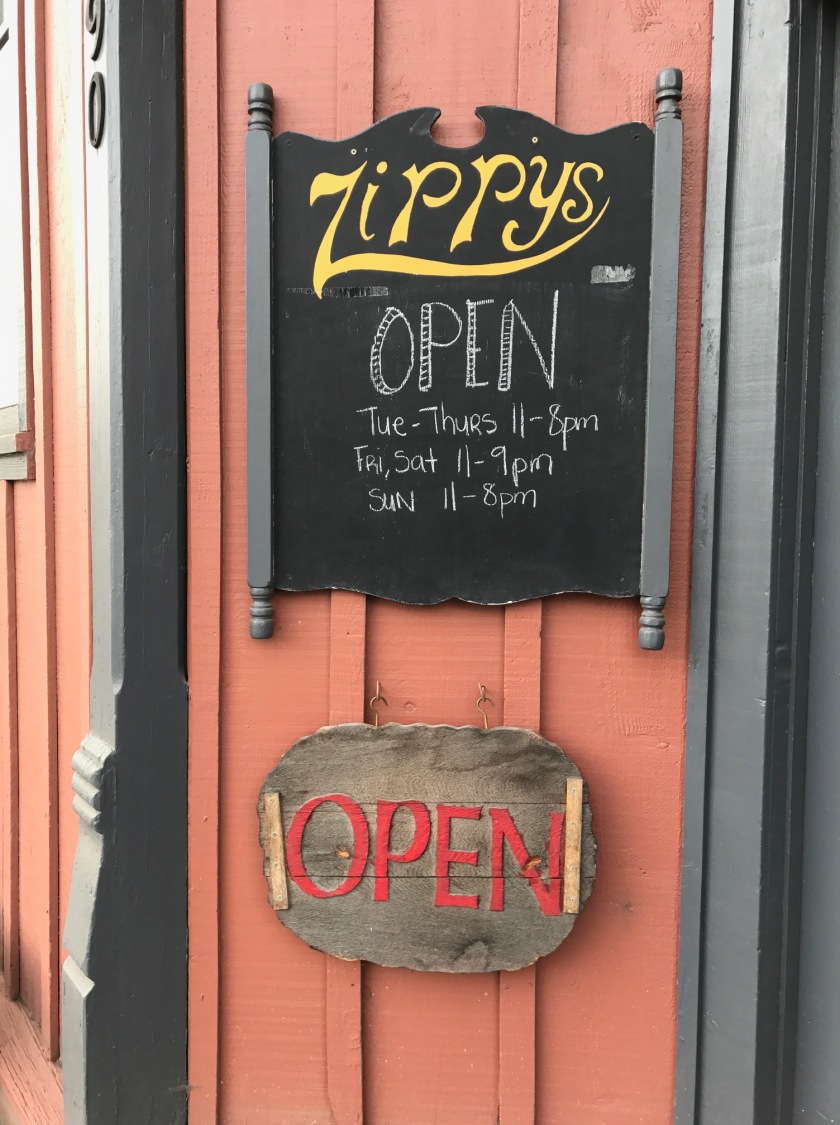 I walked in and was immediately surprised at the inside space – there was enough space to easily seat more than sixty or seventy people.  It was deceptively large.  From the outside it seemed like a smaller place, but on the inside it was huge!  Immediately to the left were several occupied tables and folks were occupied with enjoying their dinners.  Near the back on the left was what looked like an announcement board for local events – really cool!! and an old church pew and table for folks to enjoy a meal with.  On the right was a large counter and seats with a brass foot rail.  A very large mirror glass storage area with a vintage cash register was behind the counter reaching almost to the ceiling and was the most impressive piece of furniture in the establishment that I could see initially.  Past the mirror was a collection of glass fronted refrigerator doors holding bottles and another walk-in freezer or fridge that looked very impressive and had to be vintage.  I really liked how everything in the place made for a wonderfully comfortable down-home esthetic.  I just felt at home.  Wonderfully warm and well taken care of.  Like visiting my favorite aunt’s home and having a favorite chair where I knew I’d get taken care of. 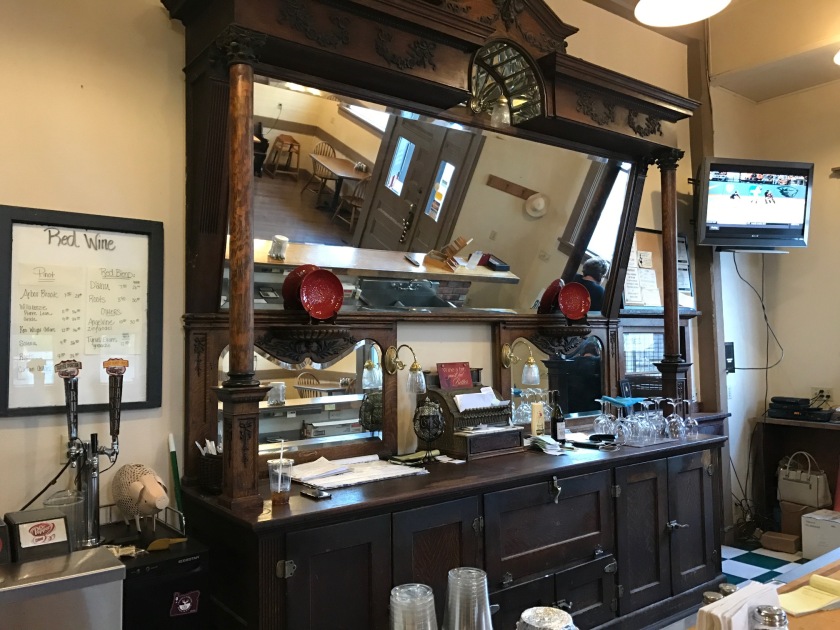 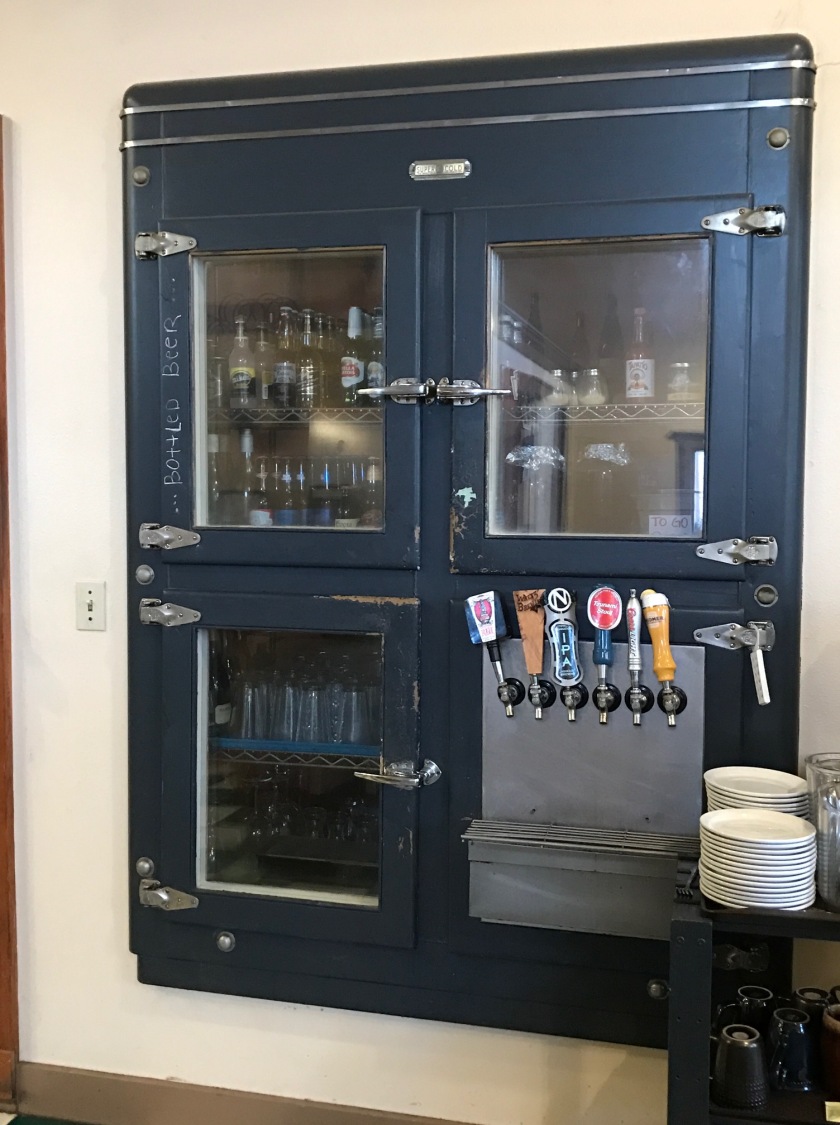 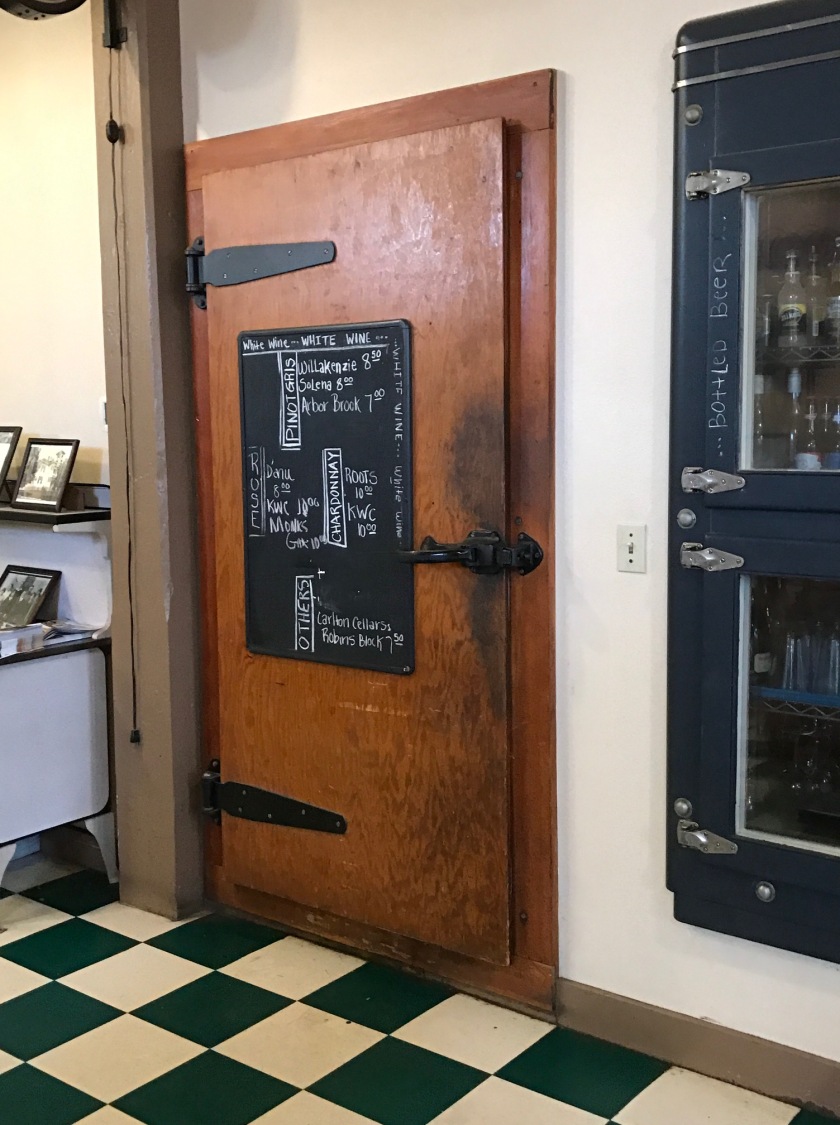 If you’d like you can order from the front counter.  However not having been a customer before I got a couple of menus and headed to an empty spot near the back and decided to sit down there.  I glanced through the menus and actually had a rather difficult time deciding what to order; everything looked so wonderful.  There’re many items to choose from including sandwiches, homemade chicken with house made spices that was fried on demand (and taken 30 minutes to make so you know it’s fresh) and pizza obviously.  The waitress who was being very patient with me came by again and asked what like to order – of course I asked for ice tea which turned out to be excellent very strong – just the way I like it.  I decided to try a create your own pizza and for this one I decided to get an olive oil and herb sauce with cheese and Italian sausage and chicken.  I suppose that may sound weird to some of you but I have weird tastes and it ended up being very goo to me.  I got a medium-size because I wanted to take some home.  The pizza ended up being absolutely fantastic, the bread that made up the crust was obviously homemade and tasted just wonderful. 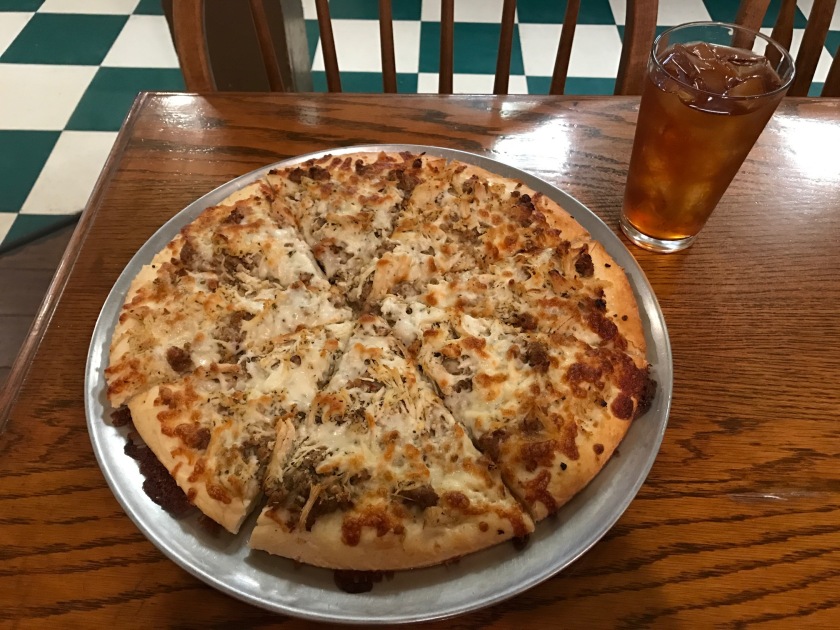 I looked around again where I was sitting and noticed there were several video games near me.  Seems like a great spot to spend some time for the kids with some quarters and just relax – I remember those days in the late seventies and eighties – oops might have given away my age a little there.  Anyhow, there was also a great older jukebox nearby as well, with tons of what I would call recognizable music in it.  Most seemed to be at least ten or more years old and on cd, however there were lots of music even I couldn’t identify.  Nothing was playing at the moment, but I thought it was good that it was being kept around to amuse the customers anyway.  Near where I was sitting there was also a large chalkboard where younger kids had already drawn on it and that seemed really nice to me – giving all of the kids something to do while visiting Zippy’s.  It’s a good idea, having something for every age bracket represented. 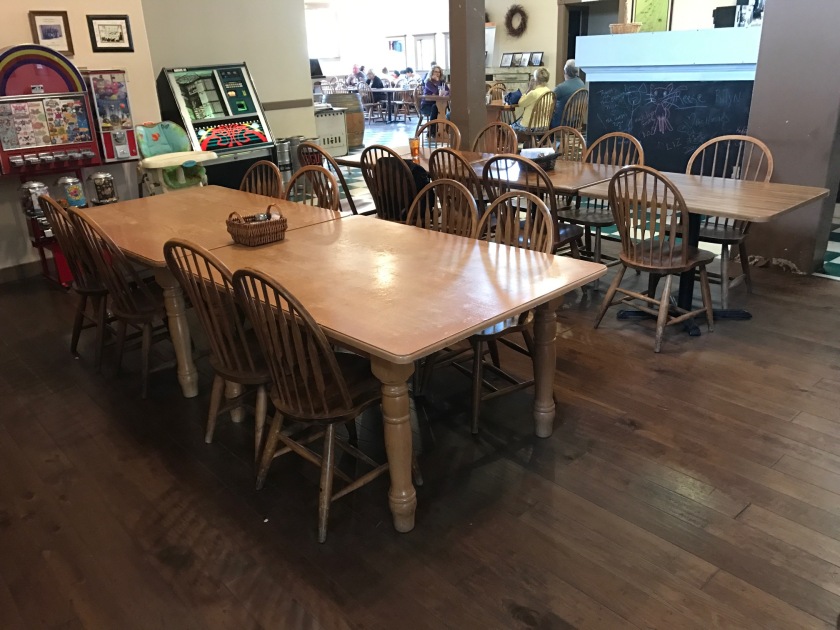 I also noticed a door leading outside, which led to even more seating.  It must really hop at Zippy’s in the evenings.  I can imaging Zippy’s getting pretty lively.  There is room outside to accommodate another ten or more folks outside. 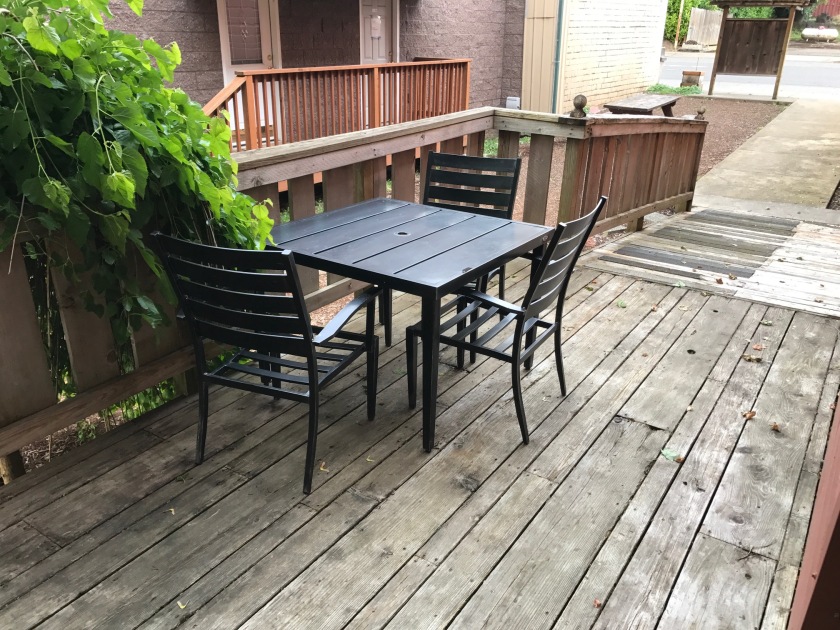 Overall I give Zippy’s five Heywillamettes for their wonderfully warm decor, their fantastic menu and fresh ingredients, and their wonderful different age appropriate offerings that the entire family can enjoy.  I really had a great time here and wish that I had stopped by many years ago I’m sure that if you find some time when you are driving through Yamhill perhaps deciding to try something new after visiting The Screaming Chicken or the Trask Mountain Outpost for breakfast or your are heading to Barrel 47 maybe you’ll decide to visit Zippy’s instead I’m sure you’ll have a great time here and enjoy some great food.