I’ve been to the Meating Place once before with B, who’s been there several times to dine at the cafe – I’d never done that, but I did visit the butcher shop the one time I visited.  Today I vowed to do both.  I was worried I wasn’t going to have a chance to do anything – I was on-call from work and fortunately got a call to visit work and take care of an easy issue.  While I was out I thought – why not take a chance to visit the Meating Place and see if I can grab some goodies and get some lunch.

The Meating Place is toward the end of the the road on the north end of Cornelius Pass, well, the road goes on a bit further but it’s the end of most of the interesting places in Hillsboro.  The signage is quite easy to see and the parking lot is fairly big, and was pretty full when I got there around eleven-thirty on Saturday.  There are quite a few places to sit outside – both picnic tables and metal tables.

As I made my way to the entrance I noticed displayed prominently on the windows flanking the front doors large signs which said local, sustainable, and fresh which was impressive to me and I relished the idea of purchasing goodies that had those particular attributes.  I like the idea of getting local goods and particularly ones that are from sustainable resources.

Once entered – immediately to my left I noticed a large display which featured many different kinds of spices and other goods to flavor and enhance different types of meats and other cooked goods.  There were different types of jellies, sauces, rubs, barbecue sauce, ketchups and mustards and other seasonings which I thought would be a great enhancement for any chef to use in their kitchen.

I was planning on trying some of their sausages so I made sure to buy some of their pub dog rolls that I saw on display just inside the front door.  Just passed the threads was a large refrigerator that featured among other things many products that seemed more suitable for our best friends like raw dog food femur bones marrow bones and other products which would be very suitable for our canine companions. I also noticed that the Meating Place has two dollar pig ears that are smoked and seemed like a special treat for any canine. 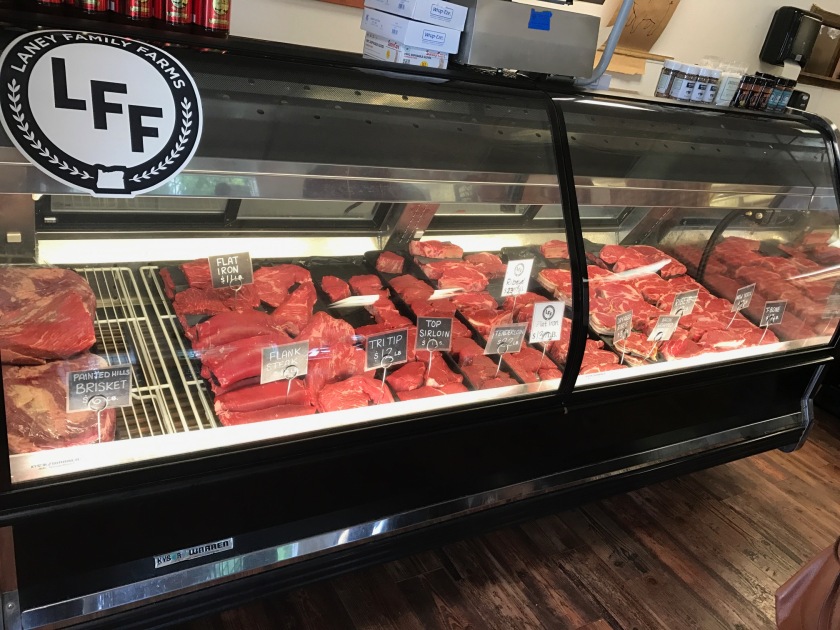 Turning to the right was another lower refrigerator with plenty of wonderful meat products available for purchase for example country style pork ribs for four dollars a pound, pork butt for four dollars a pound,  bone in pork loin for seven dollars a pound,  farm raised ground elk for ten dollars a pound, chuck patties for seven dollars a pound,  and many other ground meat products in this case as well.  There were also several types of prepared kebabs in this case as well and I wish I had some way to easily prepare them.  Looking further to the right in the same case I noticed that they had some other products which I hadn’t seen before in any other supermarket, namely rabbit, free range chickens, and chicken cordon bleu already prepared.  There were also marinated short ribs, marinated chicken breasts, peppered steaks, and several different types of ground sausage.  I’ll have to admit all of them were tempting and I wanted to try them all!!!

I was having a tough time deciding and there were so many delicious choices and the line was quite long so I didn’t mind taking a few extra minutes to look around in the next case to the right that had quite a few different items that I could put on the buns that I picked up earlier besides those items there were quite a few different types of bacon in this case as well as like spicy pepperoni, teriyaki pepperoni, and regular pepperoni.  Still my choice was to get items that I could put on my rolls so the choices for me were chicken gouda garlic sausage, chicken bacon cheddar sausage, smoked brat, farm raised elk, beer hound, old-fashioned frank, luau dog, jalapeño cheddar sausage, and a couple of other sausages that I could put on those rolls.  Finally it was my turn despite having several minutes to wait while other customers made their selections I wrestled mightily with the decision.  What should I choose should I go for something exotic and crazy or stick with something ordinary – the choice was an extremely difficult one and I think that the server behind the counter was pretty amused at my struggle to make a selection in the end I ended up with several of course, my first being two of the the chicken bacon cheddar dogs, my second selection being two of the chicken Gouda and garlic dogs, and the third being one the server recommended, the luau dog which features among many other things pineapple and is supposedly somewhat sweet – something I thought sounded quite good.

In the right side of the last case are sliced items which folks can put on their sandwiches such as smoke turkey, roast beef, smoked ham, and bologna. There’s also some delicious looking beef jerky and smoked salmon.

Above the last case are some fantastic souvenir shirts which say things like “Stop Staring at my Rump” and “Meats. Rarely Done this Well” I thought it was a great way to celebrate The Meating Place.  Having made my selection I made my way to the checkout counter. At the checkout counter were more items made at the Meating Place like custom made beef jerky, meat thermometers and some and some yummy looking candies from Jacobsen Salt Co.

I pay for my selection on the one side and stowed all of my purchase goods in the bronco Yay!! I got to drive the bronco today.  And I made my way over to the café on the other side. It was getting to be about lunch time but I wanted to have a good look at their menu because I’ve heard everything they have is absolutely delicious.  I didn’t want to be too complicated today so I ended up deciding on just a hamburger but I decided to try an elk burger as I’ve never had one of those before and it just sounded good today.

I didn’t get as many opportunities as I would’ve preferred to take a lot of pictures in the café as there were quite a few people in there and very few available spots to sit I did manage to get a spot in the back corner where I waited while my food was getting cooked. The floor was very nice with nicely polished wood and the tables were a very comfortable meadow there were also barstools and room for about twenty-five people to sit at the tables.  As I sat there my food didn’t take terribly long to arrive but the line kept growing and growing and growing and I was surprised to see that in no time at all the line stretched out the door which was surprising to see this place so busy on a Saturday at eleven fourty-five or so. 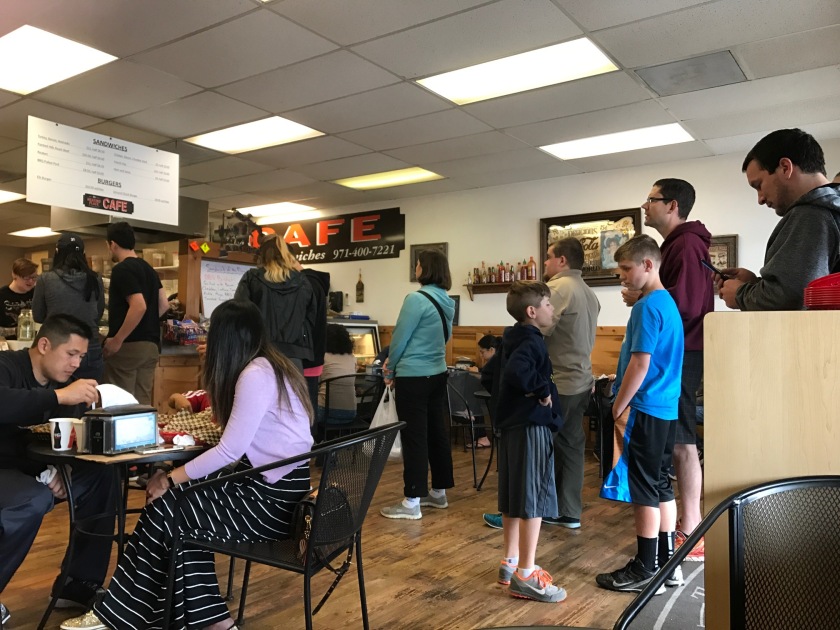 When I got my food it was much better then I had ever hoped it would be it was just amazing having never had ground old before I didn’t have any expectations but I was very pleasantly surprised at the delicate flavor and the taste was just fantastic. The aioli and provolone with pickles and bacon combine to form amazing tastes and complex flavors that I found just wonderful.

In conclusion I can wholeheartedly recommend the Meating Place and café as a place to visit for breakfast or lunch and as an alternative for any supermarket butcher for meat products both in terms of quality and pricing. They deserve the five HeyWillamettes I give them wholeheartedly. If you get an opportunity to stop by I’m sure that you will be pleased and happy with the decision you made to visit them.