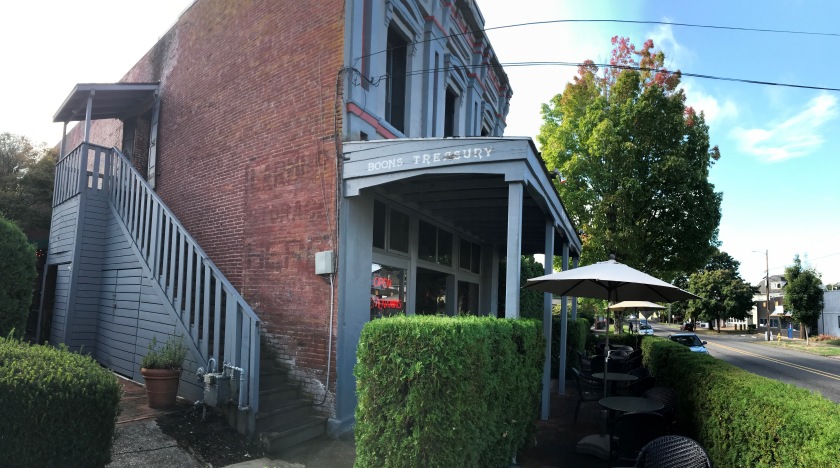 McMenamins Manic Mondays – Episode One.  I wanted to start a new series and thought a good idea might be to write about some of the success stories from the Willamette Valley – one of those is how the McMenamins organization has turned many historic buildings into successful restaurants, hotels, pubs, and theaters.  Since I was going to be in Sale this weekend I decided to start with a great historic building there.  Boon’s Treasury started out as a building built by John D. Boon who was Oregon’s first treasurer.  The treasury building served as a general store and a meeting place for state business.  In the early twentieth century future president Herbert Hoover was a frequent guest of the establishment as he was a childhood friend of the owner’s son.

Where is Boon’s Treasury?

Boon’s Treasury is near downtown Salem.  It’s a quick drive from Interstate five and has decent parking out front.

There is a decent parking lot next to the treasury on the north side.  I arrived about thirty minutes after opening, and there were several spaces still available.  The outside is all brick and definitely has an old downtown feel, though there aren’t any other buildings like it within sight.  Perhaps there once was, but now Boon’s Treasury stands as a reminder of the fantastic architecture of the mid nineteenth century.

I wandered around for a few minutes outside and found the rear entrance.  There’s a beautiful little sitting area near the back door and I took a few minutes to enjoy the peace there.

The side door to get into Boon’s Treasury is massive and imposing – there doesn’t seem to be any architectural changes in the brick around the entrance, so I can only surmise this was a side entry for the original building.

Boon’s Treasury was a bit smaller and intimate than I thought it would be – but that doesn’t take anything away from the charm and intimate setting there.  The first thing I noticed was the large carpets and wall hangings.  The floor is a very old wooden floor that is very well preserved.

On the way to my seat I got a chance to check out the specials – all of them looked pretty good and the fact that the brews side changes often is a benefit as far as I’m concerned – that means there are several delicious drinks that can be had at Boon’s Treasury.

Along the wall from the specials is a vintage stove that has an amazing brassy look and patina.  I can imagine folks gathering around it on stormy cold evenings in the late nineteenth century.

Inside  Boon’s Treasure there are seats for about sixty or seventy customers.  There is a large bar area where folks can saddle up and enjoy a nice beverage.

I’ve always enjoyed visiting McMenamins venues and have been to quite a few, I’m not that interested in some of the newer venues but I really enjoy these historic places – it’s a fantastic idea to turn older buildings into Hotels, Restaurants, Pubs, and Spas.  This is a great start to our journeys through the historic spots McMenamins has retired and managed through the Willamette Valley and this one definitely deserves the four and a half Heywillamettes I’ll award it.  I wholeheartedly encourage anyone who has an opportunity to visit Boon’s Treasury.