Bridge Over Troubled Waters Tuesday – Week eight!  The Chambers Bridge was the last one I ended up visiting on my tour of Cottage Grove.  It is located within Cottage Grove and is quite easy to find.  To my surprise when I arrived it turned out to be much bigger and far better preserved than most of the other bridges and the reason became clear as I began my exploring and documenting.

I had to park my car around the corner on a side street but didn’t mind too much, I’d been finding and exploring bridges for a couple of hours now and was swiftly becoming an expert (not really).  When I drove by I noticed this bridge was easily twice as tall as any of the other bridges I’ve seen so far.   As I walked up to it I realized Cottage Grove had spent some expense making it a beautiful tourist attraction.  There was a very nice concrete ramp going up to it from the street level.  Presumably it is not only a tourist attraction but also a non-motorized vehicle means of crossing the Coast Fork of the Willamette River.

Once inside I realized that the bridge has been rebuilt not too long ago, but I also noticed that much of the wood was reused from the original bridge and the size was also the same as the original had been.  There are fantastic designs on the inside that show how big trains were that ran through the bridge – and according to the plaques positioned throughout the bridge the smokestacks needed to be shortened to get through the bridge.  I guess it’s amazing that the bridge never burned down, with the heat that must have been coming off the running trains.

Another feature I immediately liked but was pretty sure wasn’t original was a section of the roof in the middle that allowed light to enter the bridge.  It added quite a bit of light to the interior and allowed folks to enjoy even more the interior designs that went in to the bridge. 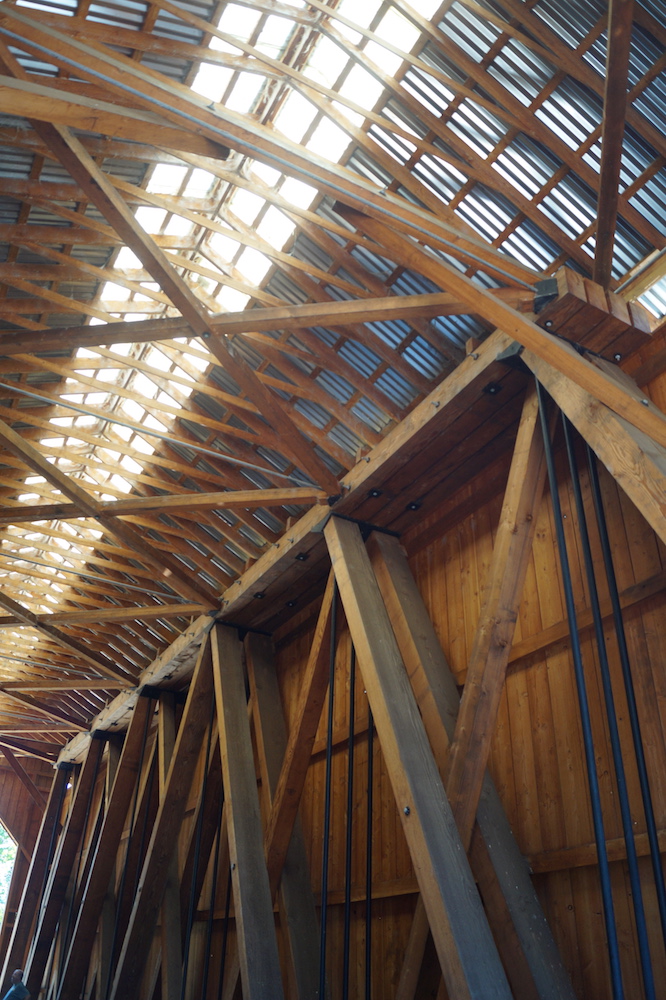 On the far end through the bridge is a play structure/sculpture that I imagine is the size of the front profile of a train that must have gone through the bridge – it really gave some perspective as to why the bridge was so tall and added a lot to the experience of visiting the bridge. 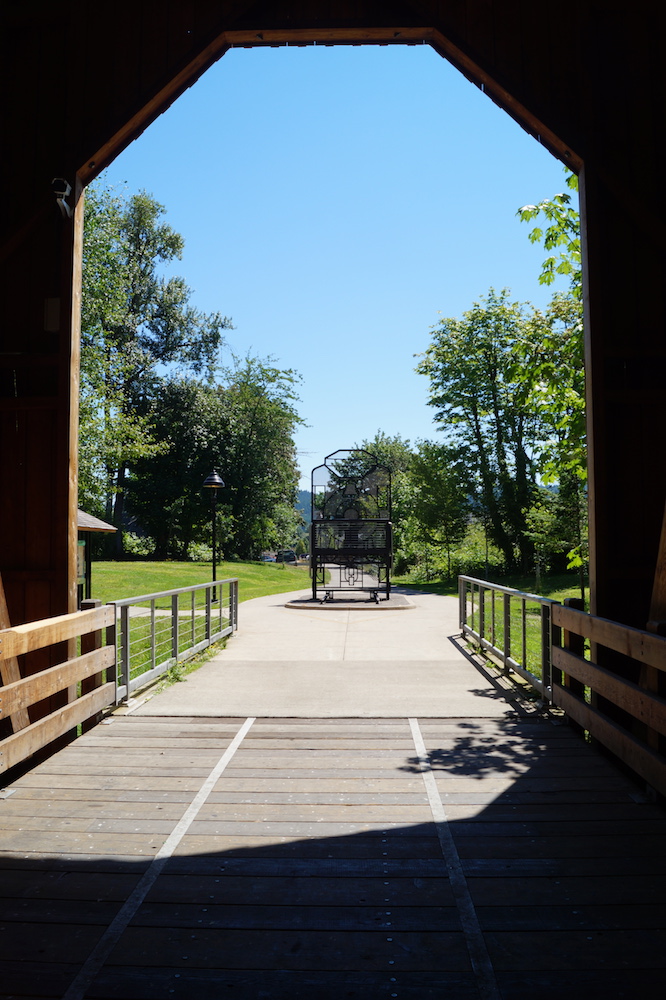 When we got to the other side Nic and I noticed there was a very nice display that showed much of the history of the bridge – this was another part of this bridge that I particularly enjoyed – it’s link to the past.  Allowing folks to understand and read about the history really added something for me and made the experience that much more enjoyable. 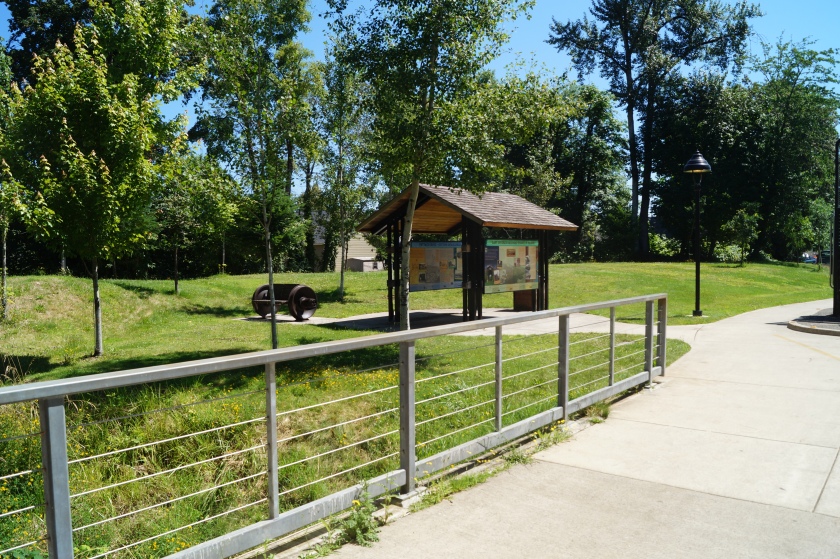 The displays talk about the history of the bridge and it’s significance.  It turns out that the Chambers Railroad Bridge is the last covered in Oregon, and is also the last remaining fully covered railroad bridge west of the Mississippi River – definitely something to celebrate and visit!! 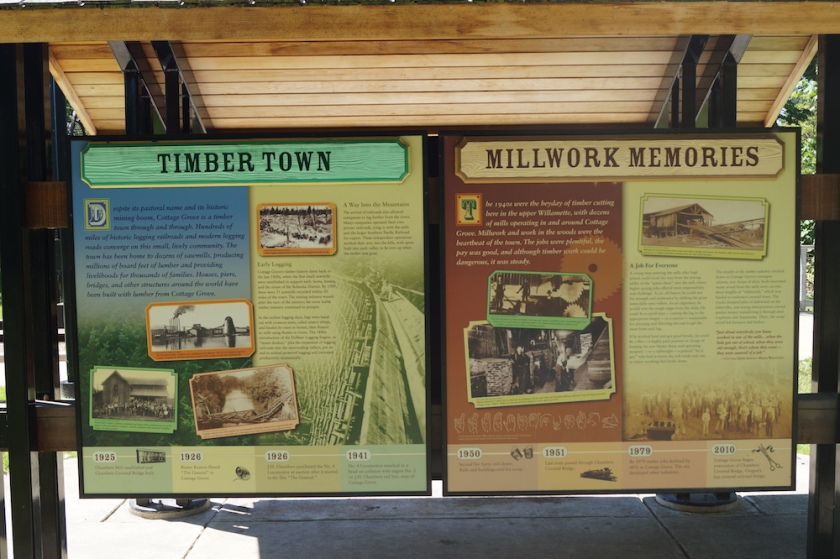 Near the display is a set of train wheels that has been turned into a park bench, this is a fantastic touch and I thought it really added something to the park – being able to see how fully large just the train wheels really reminds folks that the trains that drove through this bridge were massive.  The added bonus being the bench was super comfortable and very nice to relax for a moment upon.

Nic decided she needed to try the structure that was the front profile of a train and climbed up while I moved back to get a picture of the perspective – I was reminded again how large the trains were and how massive the bridge that accommodated them is.  The play structure is another way to connect folks to the bridge visiting experience, and though made mostly for kids the structure encourages folks to visit and enjoy the park.  The more folks who get an opportunity to visit the better maintained the park will be, I figure.  You’ll want to be careful when descending, as I can imagine the black-painted structure might get warm in the direct sun and the ladder is deceptively slippery.

This is one of my favorite bridges so far!!!  I cannot recommend highly enough that if you get a chance to visit Cottage Grove you take an opportunity to visit the Chambers Railroad Bridge.  Some thought and time has definitely been put into designing the park and other features near the bridge and it’s obvious how much the bridge means to the community. This bridge definitely is a five Heywillamette worthy experience, and I hope you all get a chance to see it in person.