I’ve been to Oregon City several times, mostly to visit a favorite watering hole, but there are several things to be seen there and some of them are pretty unique.  For example, there is what is called a vertical street there.  “Hey, what is a vertical street?”  I can hear you asking – so glad you asked.  Well, in this case it’s actually an elevator that goes from normal street level up to the top of the bluff – about eighty or ninety feet up.  It’s an elevator that always has an operator – while it is open, and yes, it does have posted hours, but perhaps I’m getting ahead of myself.  On this particular Saturday I decided to visit Oregon City as it had been a while since I was there and I had a hankering for some Scottish food – unfortunately I didn’t get to visit that spot the entire parking lot was full!  However I decided to regroup and visit some other places, starting with one of my favorite things – the vertical street.  Coming off the Hay Bridge from the north the vertical street and it’s top can easily be seen as it stands quite a bit over the rest of the scenery and is above everything else in downtown.

At first when approaching the Municipal Elevator there is a grand entrance – it seems like Oregon City has turned this into a bit of a tourist attraction, and why not?  There is tons of history here and it’s visible once entering the corridor to the actual elevator.  There are six or seven “moving” pictures, you know, the kind that when you move your head one way it’s one picture and a different way there is another picture there?  Well, most of the static – non painting pictures are these, so my picture quality may not be the best, but once you see them in person it will be actually pretty amazing.

The pictures all show some period of history about the elevator – which I imagine presented early residents of Oregon City with a bit of a challenge – how to get up the nearly vertical cliff to the bluff above?  When all of the pictures have been viewed, there is a large ornate portal to the actual elevator, it’s got beautifully polished tiles all around and is quite ornate.  But before entering the elevator there is a stairway to the left that goes to a series of steps that can be used to climb the bluff – I’ll talk more about those steps as I do the descent – you know my knees are bad, so down is better than up the stairs. 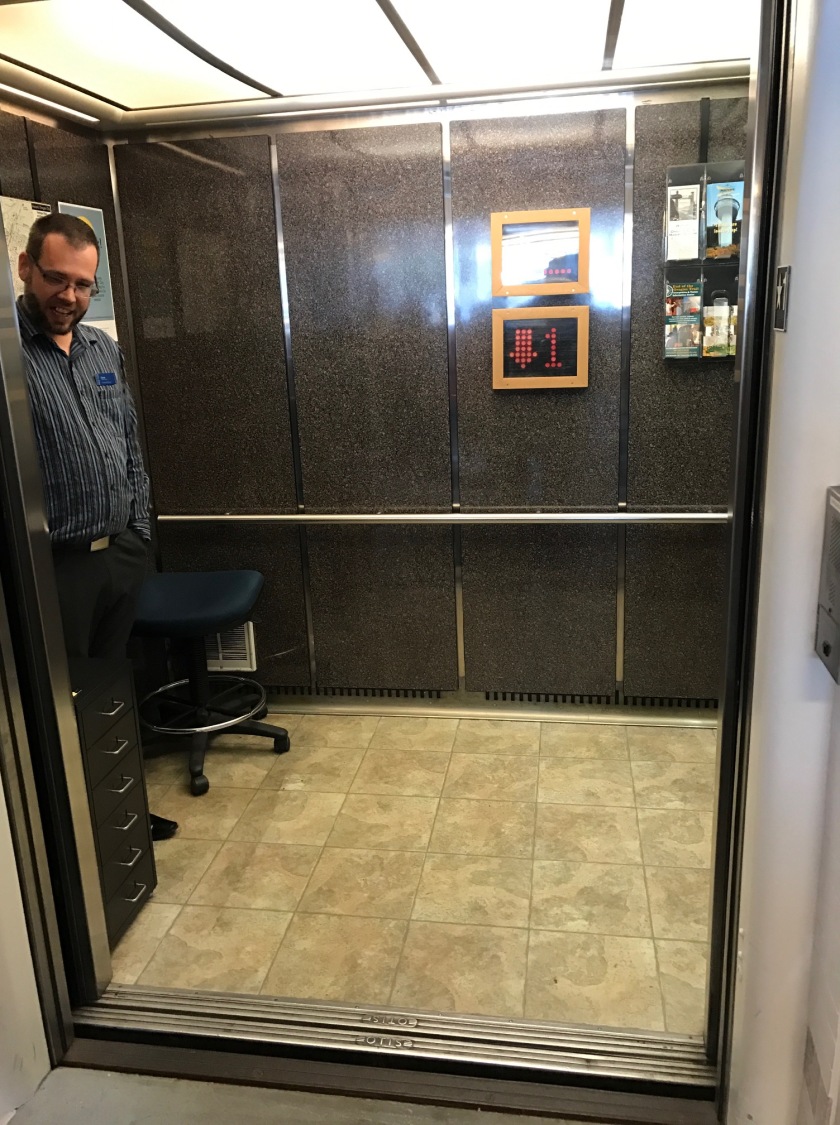 From the top there are magnificent views of Oregon City – the entire town is spread out in front of the viewer and all of the downtown can be seen as well as the HWY Bridge and the river.  It’s a good idea to take in the view for a few moments because once you start reading about the history and looking at the pictures you might forge the view is there – this place is filled with history.

Like the downstairs there are many of the “Moving” pictures and just below the observation deck windows are dozens of pictures celebrating the construction and remodeling of the elevator.

Once you have seen the moving pictures make sure to look at the ground and you’ll notice there is actually a painted map of Oregon City – with the lots and streets laid out below – I love this idea and spent some time looking at all of the streets and different locations shown on the floor.  There are also very nice and explanatory spots where you can read about the history of the bridge and issues that were faced by the original constructors and how the remodeling was done – as it is periodically.  These add quite a bit to the history of the elevator to me and I definitely encourage folks when they are visiting to take a look at the signs and absorb some of the history there – it’s a fantastic read.

As I made my way around the outside of the elevator – I’d decided to use the stairs on the way down, as I recalled there are some nice views and are an attraction themselves.  Along the bluff there is a fantastic walkway where some high-end businesses are located – this is prime real estate as far as I can tell. 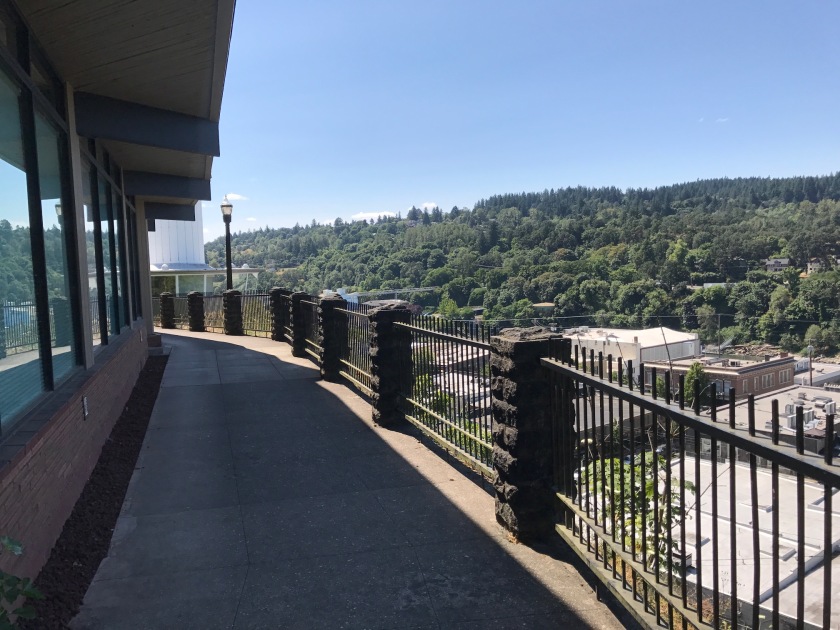 If you go to the left once exiting the elevator viewing area there is a path that goes to the stairs.  It’s super well constructed and a beautiful walk down.  It’s constructed with native rock and is quite sturdily built.  The Fourth of July flags celebrating the holiday were still up when I visited and I thought that lent a festive atmosphere to the stairway.  After the first set of stairs there is a corridor followed by another set of stairs that goes across the street – I really liked the way the engineers thought of using this space to allow pedestrians a means to get around without being too intrusive on road traffic – it adds a European flair to the place in my opinion. 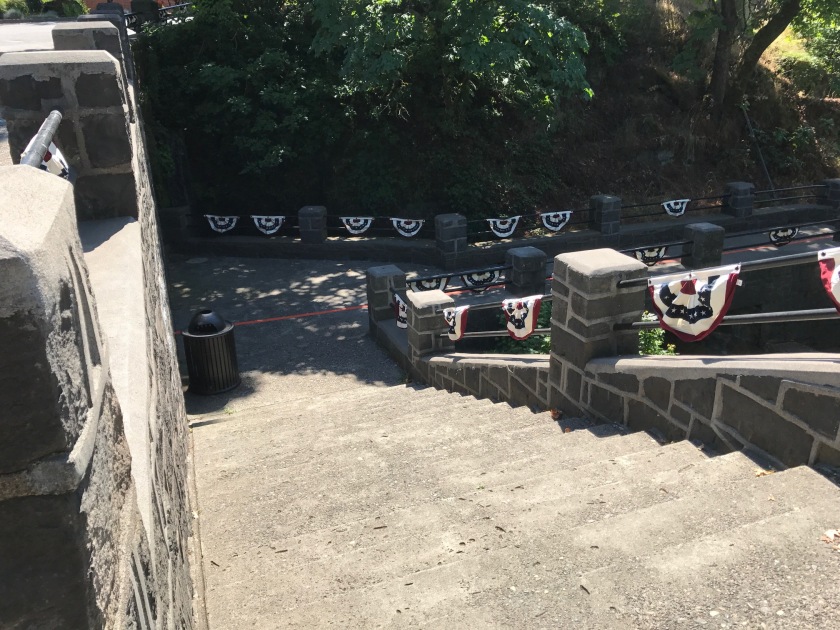 The last set of stairs go all the way to the elevator entrance – remember the stairs that was on the left of the elevator opening?  Those are the stairs.  Be sure to enjoy the views as you’re walking down the stairs.  The elevator is certainly a fantastic place to visit but I also appreciated being outdoors and walking along these super nice stairs.

Also, and this is a bonus part, I thought I’d share for just a moment another place super close to the elevator – it’s a fantastic hobby shop called Coin Corner & Hobbies that has every kind of toy and thing you will ever want of have heard of.  I was able to find wrestling magazines from the eighties, Star Trek figurines from the late eighties, metal toys from the fifties and sixties, they have just everything and also have trains, and old coins, just everything to browse through.  I’ll probably do a story on the place at some later time, but while I was visiting Oregon City I thought I’d take a quick picture and tell all of you about it.  Be sure to take a look – especially if you have kids, they will love it!!

All in all I really appreciate the history in Oregon City – the elevator is a fantastic attraction and has quite a few pictures and other historical items that can be appreciated while visiting.  Be sure to visit Coin Corner & Hobbies while you’re in the area, it’s a fantastic shop.  The elevator and hobby show definitely deserve five Heywillamettes, but because they are so close and early seen I’ll award an extra half Heywillamette for a total of five and a half.  Keep in mind that parking during the week costs but on the weekends (I’m pretty sure) the parking is mostly free.