Once again I’ll be intriguing you with an interesting place with some kind of special significance to me – I felt a little guilty after the last one and wasn’t sure anyone would be able to figure out where it was so found a place I’m certain many of you will be able to immediately recognize.

Funny story, I remember when I was in college going here and looking at all of the lights of the city.  I’d bring my then girlfriend there and tell her “Look, it’s Orion!!” which was her que to look up then look at me, at which point I’d try to sneak a kiss – oh, the games we play, right!?  It was always a fantastic view (the skyline – not my girlfriend, even though she was).  Different from today, but still always fantastic.  While in college I became interested in photography, in particular medium format photography.  I owned a small twin lens camera much like the one below that I used to get a picture of the skyline one night.  I also developed the film and made the enlargement.  The negatives and prints have been lost to the mists of time, but I do have this digital image, so wanted to show it here as well. 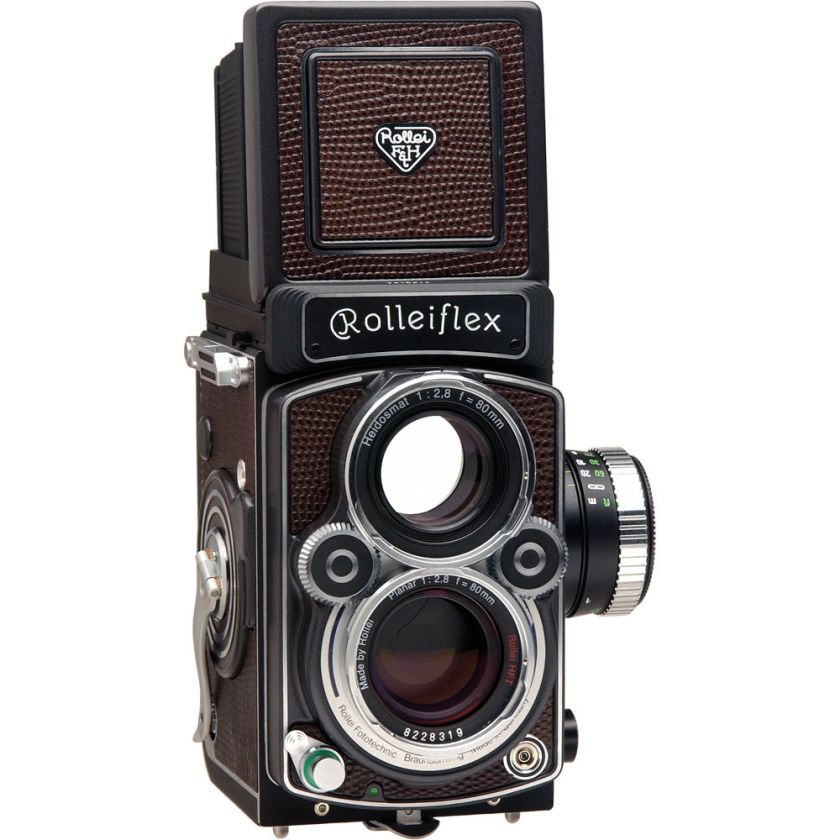 The skyline shot I got from this hidden location turned out pretty good I think – perhaps somewhat bright, but I think the view is spectacular and the impression is one of this specific skyline from this particular spot – maybe that’s giving away too much, but like I said I’m feeling a bit guilty from last time. 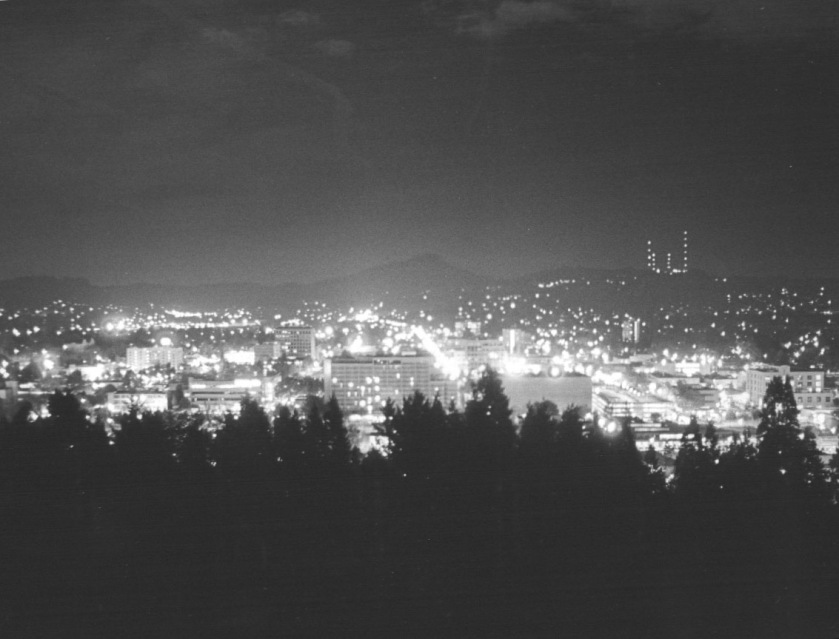 Knowing that I wanted to do this story and knowing that it was important to re-create the view above I decided to visit the same spot and try to get a similar shot.  Now, that medium format camera is unfortunately long gone, but I do have a nice DSLR camera that I’m hoping can take some longer exposure shots in later in the evening, so we’ll see. 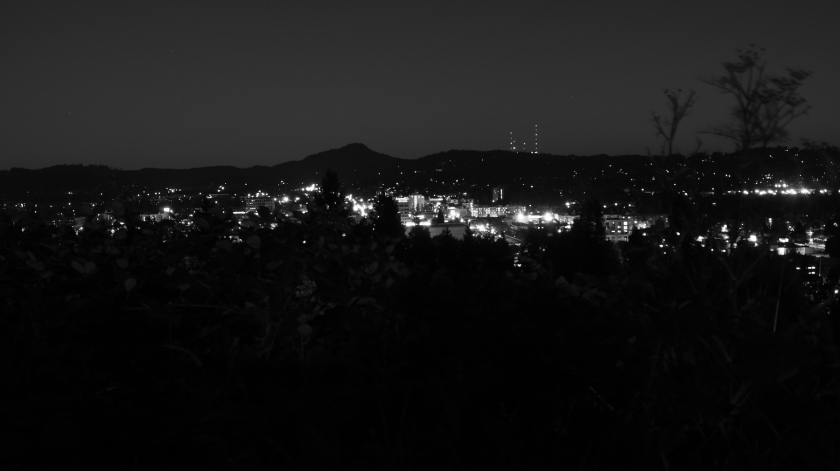 Well, it looks pretty good, maybe not as zoomed in, as it turns out I don’t know very much about the new camera – the old camera was easy to get the right ISO and all other settings and the prints could always be a little burned in while developing and printing, so lots of things could be adjusted in post-production, and I’m sure I could have done something differently, but I did what I could.  This was about a thirty second exposure and you can see the bushes on the right moving a little while the shutter was open.  No bit deal, but you can also see the trees have grown in the last twenty years.  It’s been a long time since the first picture was taken!! 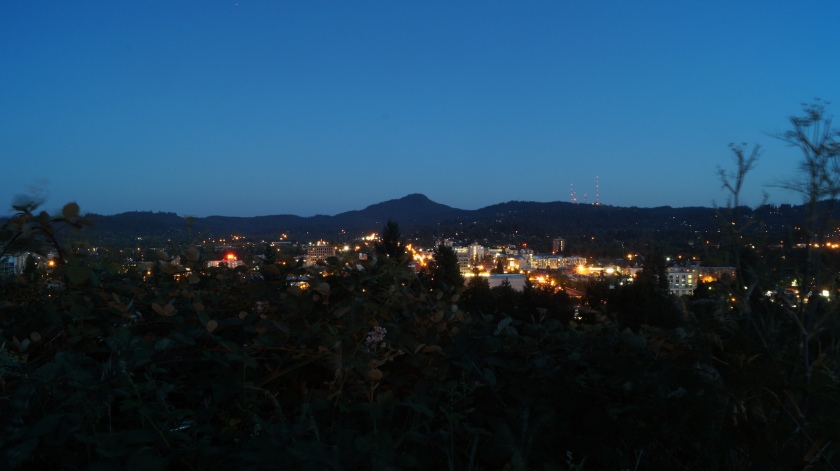 Here is a color picture of the same view taken a little bit earlier – the bushes moving can be seen a little bit better, as can some of the different light colors.  This might help some of you figure out where the Hidden Willamette Valley location is, and if so, try not to spoil it too quickly for everyone else! 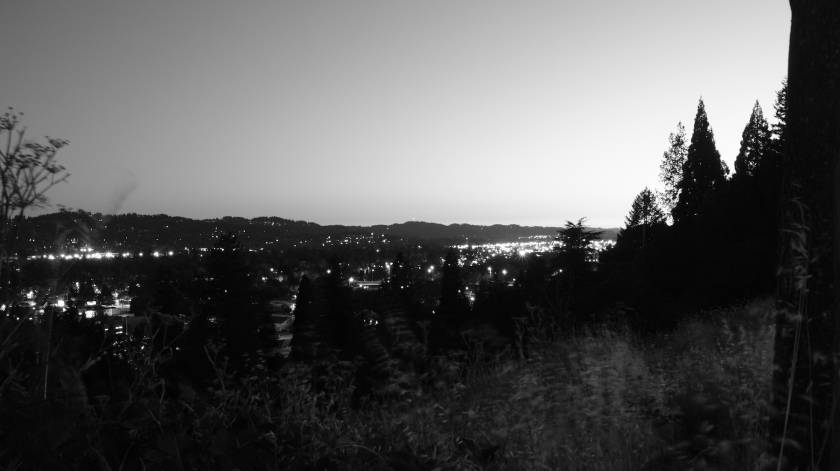 Here’s a shot looking west toward the setting sun, I really liked how stark the trees looked against the white of the sky and how the lights of the city looked like they were going on forever.  Another longer exposure shot. 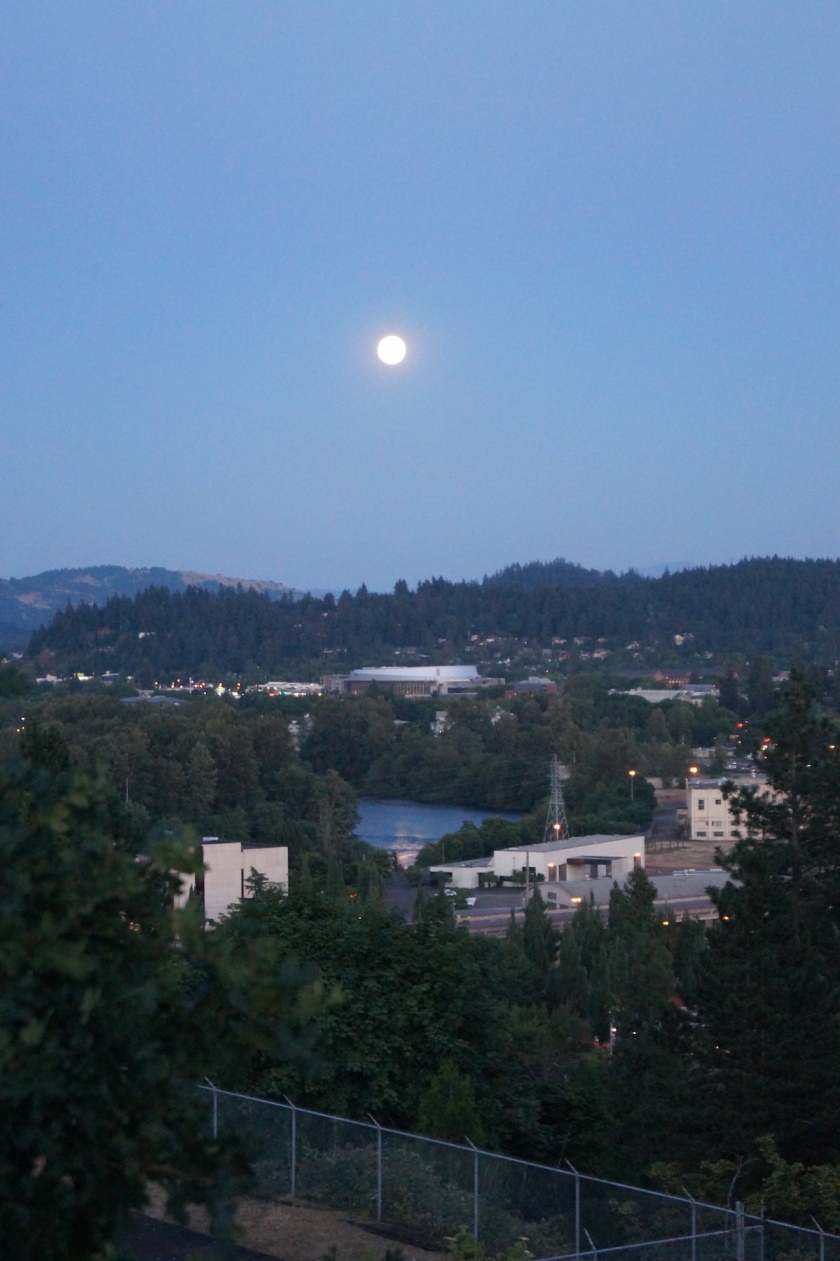 One thing I didn’t realize until Nic pointed it out to me was that it was a full moon, and I managed to get a nice picture of the moon reflecting on a small body of water.  I think if I had been paying attention a bit better I might have gotten a little better angle, but that’s what I get for being asleep at the wheel, right?! 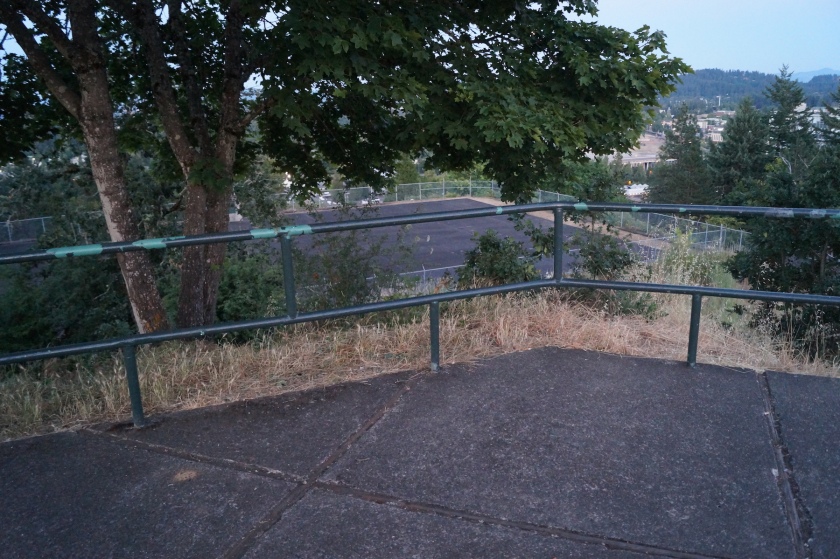 Here’s a shot that may aid in identifying the Hidden Willamette Valley location.  As I recall the location is very near a water reservoir – one that is built into a mountain or hill, it’s covered by a huge concrete pad – the first picture shows the pad surrounded by a chainlink fence. 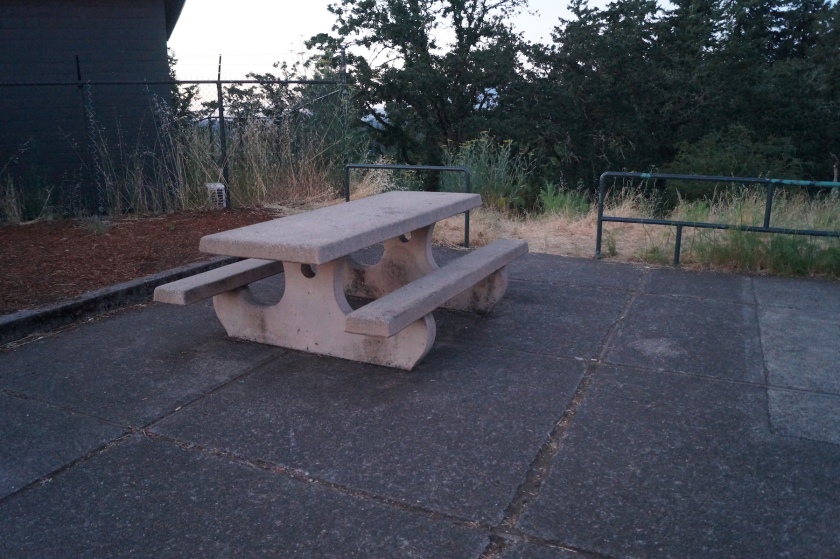 There are also some benches there that folks can have their lunch or whatever meal they are working on at the time on.  If it’s during the summer the sun can get brutal, fair warning. 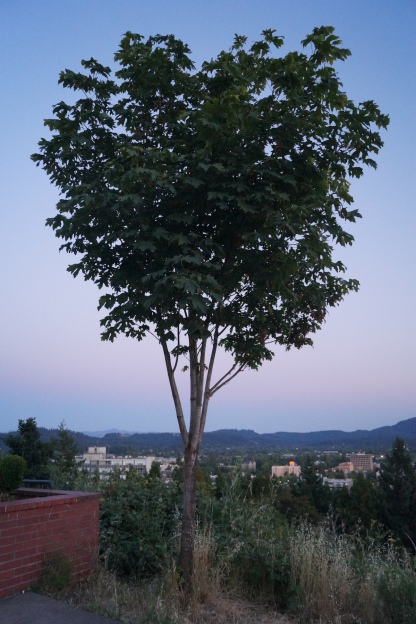 There are also some lovely trees near this spot.  On this particular night (Saturday) it seems like lots of other folks had the same idea and wanted to visit my hidden spot, so maybe the secret’s out!  All in all, this spot is a fantastic spot and easily accessible via car.  There are places to walk nearby and some trails nearby as well.  It deserves five big Heywillamettes for being a familiar spot that has given me lots of great memories “Look, It’s Orion!!!” and some great city watching opportunities.  If you figure out where it is, you should definitely visit, its a great adventure!!!!