Bridge Over Troubled Waters Tuesdays Week Three.  It was a little bit of a drive from the last stop which was the Harris Creek Bridge and I lost cell reception a few times which made navigation a little difficult – it may have been a much better idea to have the Garmin in the car, but it has to be an adventure doesn’t it?  The drive wasn’t unpleasant, don’t get me wrong, it was plenty nice, but I was a bit fearful of getting way lost a couple of times.  The way to Irish Bend Bridge is through the Oregon State University campus and after driving through the country so much it was a little bit of a shock to arrive at the city.  I hadn’t ever driven through the OSU campus – being a duck myself, sorry beaver fans.  But it was a lovely campus and there were lots of experiments happening on the way to the bridge and quite a few people walking themselves and their animals along the road that led to the Irish Bend Bridge.  The road ended at the – well, the end of the road – the Irish Bend Bridge on the left and some paths continuing to the left and right.

I arrived at the bridge at the same time as some other cars, apparently the bridge is somewhat of a tourist attraction – I can tell because it’s a nice example of the architecture of the covered bridges that are becoming familiar for having been built during the twenties and thirties, that and this is the first one that I’ve actually seen anyone else at.  It’s nice though that folks still celebrate the covered bridges by visiting them.  As I walked up to it I noticed this one is specifically only for foot traffic, unlike the last one – Harris Creek Bridge, which was a drive through bridge.

As I was walking through I noticed the Irish Bend bridge – like the Harris Creek Bridge didn’t have any windows – but rather some narrow openings near the roof.  I thought it was a shame – there seemed to be nice view along the river so I’m a little unsure why this particular building method was chosen – maybe to keep rain out and the wood from getting sodden or ruined in the Oregon weather?  Something to ponder for sure.  The large timbers on the sides that made up the main supports had a greenish tinge – maybe mold or some kind of preservative. 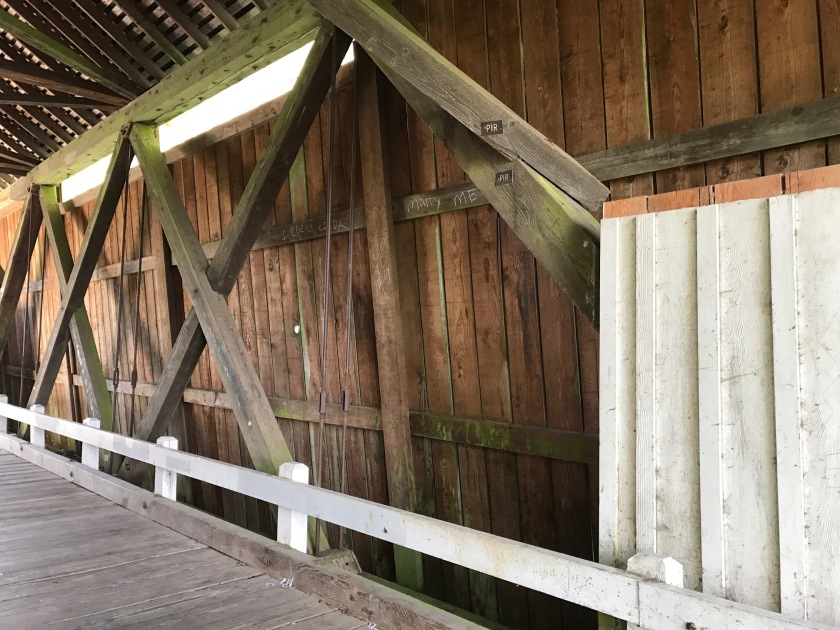 I walked along the path for a bit and really enjoyed the scenery – this has to be one of the nicest areas near a bridge I’ve found so far – there isn’t a spot specifically dedicated to the bridge like there is at the Ritner Creek Bridge, but it’s still a really nice spot.  If you continue along the path you’ll make it back to the start where the bridge begins.  I made my back through the bridge enjoying the time, and while I did I noticed the large timbers that made the structure were labeled with different small labels, the ones I noticed on the right (looking from where I started) was labeled PIR.  I’m not certain what they meant, but were likely installed there to help with some kind of relocation or reassembly of the bridge.

As I made it almost to the end I noticed some hand written messages written in chalk on some of the timbers – one was particularly interesting “Marry Me” I thought that was pretty cool – must have been a couple who loved the bridge and celebrated that special moment.  Pretty heart warming. 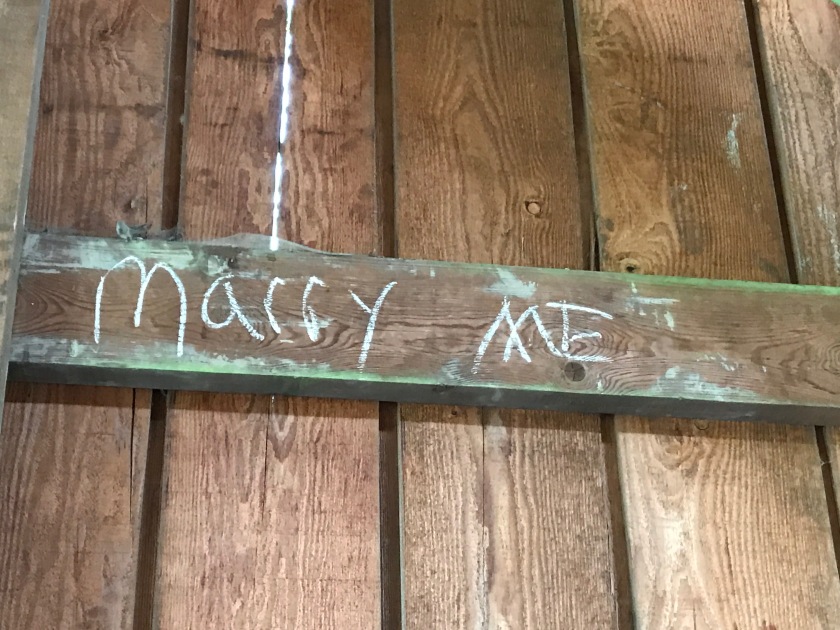 As I left the bridge I noticed a purple pained bench – it looked very comfortable and inviting.  I took the opportunity as it was a little warm and sat down for a few minutes.  The view of the bridge and the surrounding greenery was very comfortable though I could feel my allergies getting a little worked up being this close to all of the growing stuff in the early part of the summer.   No problem the beauty of the moment was completely worth it.  There was also a nice natural bird bath where feathered friends could take a bath and play around, just to the left of the bench.  In front of the bench was a plaque: “In Memory of Roland O Clarke, Teacher, Ethicist, and Environmentalist”  I thought that was a pretty nice tribute for him.  Nothing else about him, but having this here at this historic bridge was very nice.

I really enjoyed the Irish Bend Bridge – it’s in a beautiful spot on the OSU campus and has a fantastic little path through it which continues in a short circle and there’s a nice spot to relax at the start as well.   It deserves four and a half Heywillamettes and is very worthy of folks visiting it.