Friday night.  Rainy!!!  I decided to head to Newberg and try out a barbecue restaurant I’d heard about.  It’s a short drive from Hillsboro, maybe thirty-five or forty minutes and even though the weather was icky enough to make me hope it would all be worth it.  Growing up in the south I’d always enjoyed good barbecue so I was excited to visit this place and give it a try.

There was a great parking spot right in front of Storr’s Smokehouse and we deftly maneuvered our truck into the spot and went inside.  The sign was easy to spot and it was located in what I consider to be the downtown of Newberg.  There is some outdoor seating but on this rainy chilly Friday the best seat was definitely inside.  The inside had a very cool decor that someone had obviously spent quite a bit of time and effort on.  There was a large bar area (where I ended up sitting) which has spots for around eight or nine people and tables for another twelve or fifteen people.  While I was there many of the tables filled up, and I could easily see the place being full and many folks getting their barbecue to go.  The walls were white-washed cinderblocks – which might sound uninspired, but with the colorful menus, large coolers, and repurposed pallets artfully stained and mounted as the rear wooden walls create a very unique and charming atmosphere. 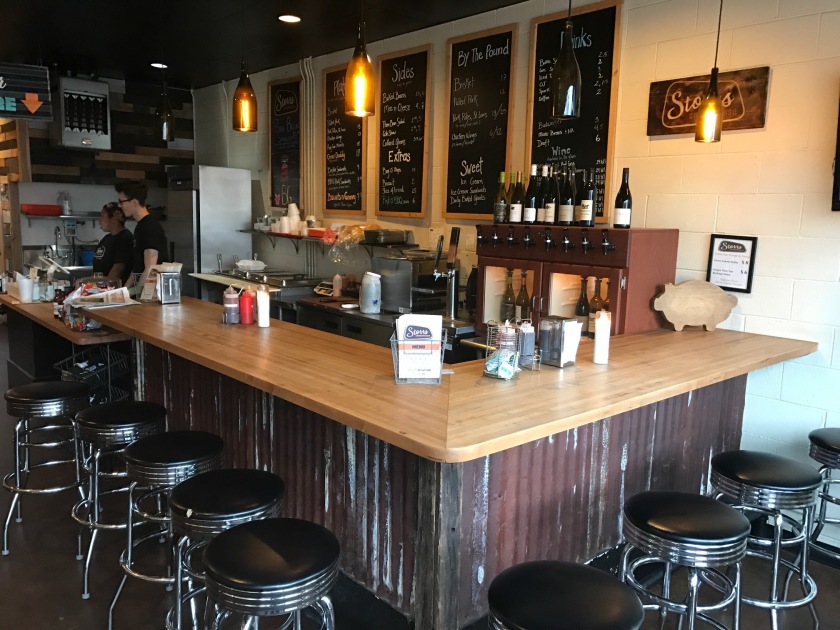 I spent a little time admiring the menus behind the pay station.  Everything looked so amazing, and the smell of barbecue actually made my mouth water.  They really did have a bit of everything here and had many of the favorites one should expect from a barbecue restaurant.

I decided upon the Gran’ Daddy which I knew from asking and reading the menu had a bit of everything in it.  I also ordered a biscuit as I’m a tremendous sucker for a homemade biscuit.  As I was paying I also noticed some other items for sale at Storr’s – namely some of their signature barbecue sauce and a bowling shirt (that I desperately wanted!!!).  I managed to avoid that temptation for now. 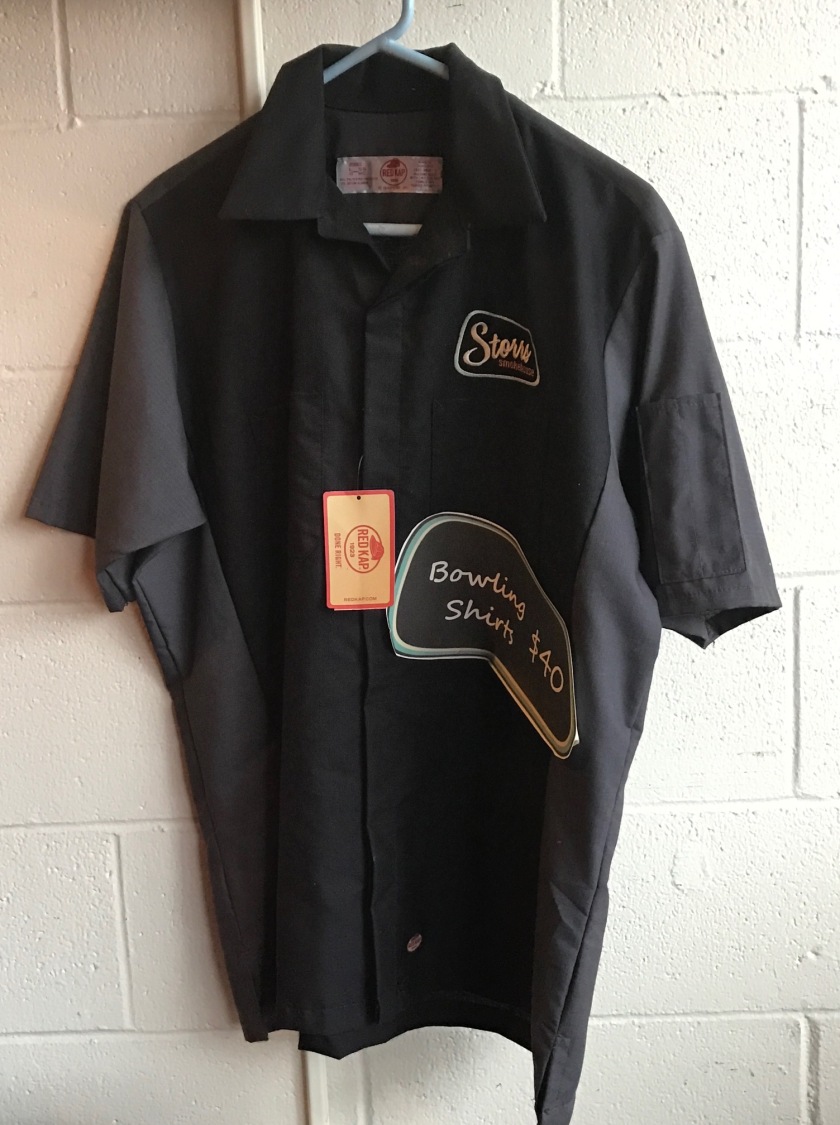 I took a look at the paper menu – Storr’s also does catering – sounds like that might be something to consider if I have some event needing barbecue.  I thought it was interesting that Storr’s opens so early – 8am, it might be interesting to get breakfast here someday, I did notice there was biscuits and gravy on the menu, and those are good almost any time.

While I was waiting I also noticed at the end of the bar an interesting sight, there was a small cooler where eight wine bottles were connected eight taps.  I’d never seen anything like this before nor had heard of anything like this, so I thought I’d take a picture and mention it, as unique as it appeared to me.

My food arrived in short order and was beautifully prepared.   I was very pleased to find all of my expectations met and exceeded.  When the food was delivered John the proprietor explained all of the sauces they produce and feature – all were excellent and it was very helpful to have the pairings explained to me.  The first thing I tried was the shredded pork with the regular flavor barbecue sauce – it turned out to be as tasty as I thought it would be, just amazing.  Then I tried the brisket with the same sauce, wow, I’ve had brisket before, but not necessarily brisket that could be cut by a fork.  That was wonderful!!!  The ribs I tried with the slightly spicy house barbecue sauce and was super impressed, was there any way to top these??  Lastly I tried the chicken wings.  These were just fantastic!  I put some of the regular barbecue sauce on them and was very happy with all of my choices.  My biscuit turned out to be fantastic – just as I’d hoped.  I will have to say that even though I tried everything I didn’t manage to clean my plate and had to take some of it home – John the proprietor actually gave me a little bit of a hard time – with a smile about that.

As I was leaving I noticed some bulbs hanging in the back almost like there as another seating area and I asked if I could take a look at it.  John said that it was planned to be a seating area but there were still some regulations that needed to be completed to be in compliance with the City of Newberg, but he agreed that I could take a very quick look.  Back there was a giant smoker that John explained to me was where all of the meats were prepared, they were smoked with oak wood, rather than propane and wood chips, which I thought would take much longer.  In fact there wasn’t a fire in the main chamber of the smoker the fire was in a side chamber and was burning merrily and the main chamber was hot but not super hot, so the meat – not surprisingly got very tender, as I had noticed and need able to cut with my fork.

I’m very happy that I was able to meet John and visit Storr’s Smokehouse.  I will definitely be going back and visiting Newberg for this wonderful barbecue restaurant.  I give Storr’s Smoke house five and a half Hey Willamettes for their wonderful restaurant.  Five because their food, atmosphere, and wonderful homemade barbecue is deserving of a five out of five rating, but I also award Storr’s another half-star because John was a very accommodating host and was genuinely caring about all of his customers.